Plant of the Week: Bleeding Heart 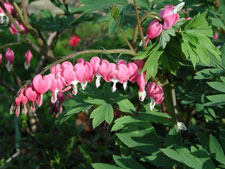 Bleeding heart is one of the showiest spring bloomers in the shade garden.

Flowers of higher plants are built from the basic blueprint of nature, but oftentimes their modifications are so extreme it's hard to follow the plan. Bleeding hearts is such a flower. Though it has most of the basic parts and pieces of the “normal” flower we learned in our youth, it's in every way an odd duck in the floral kingdom.

Dicentra spectabilis is a favorite perennial of the shady flower garden. Bleeding heart emerges early in the spring to produce fleshy 2- to 3-foot tall, ferny leaves that are individually divided into segments of three. The plant is moisture loving and the foliage begins to wither away by midsummer during most years.

On the ends of the stems and upper leaf axils, flowering arms are produced from which dangle seven to 15 pendant, pink and white heart-shaped blossoms. The pink, three-quarter-inch-long blossoms dangle like ear-bobs from a quarter-inch long peduncles.

The outer pair of inflated petals folds back as the flower “opens” to reveal a teardrop-shaped structure at the base of the flower that contains the stamens and pistol. Plants begin blooming during the first warm days of spring and remain in bloom for about a month.

Bleeding heart, native to northeastern China and Korea, have been grown for centuries in Eastern gardens, but it didn't make its way to the West until about 1740 when J. G. Gmelin, a German botanist working out of St. Petersburg, Russia, introduced living plants to the botanic garden there. This introduction never made its way to Western Europe, so it was not until 1847 that Royal Horticulture Society plant explorer Robert Fortune finally secured it for English gardeners.

Within a few years, bleeding heart had become so common it was described as “common as a wallpaper pattern.” Eventually, its popularity began to wane, but it has reemerged from obscurity with each new generation of gardeners because it's so unique and easy to grow.

Bleeding heart requires a well-drained, but moderately moist, site for best performance. A neutral-to-slightly alkaline pH is best. It's best in light shade, but in northern regions it'll grow in full sun as long as supplied with sufficient moisture during the growing season. Because it dies down as summer advances, it's good to use with bulbs and other spring blooming plants. Plants are winter hardy from zones 2 through 9.

There are over 20 species of Dicentra - most of which go by the common name “Dutchman's Britches.” Bleeding heart is an outlier from most other species and is remarkably uniform in its characteristics. It apparently cannot be crossed with the other species so no hybrids are available. 'Alba,' a white flowering form, and 'Gold Heart,' a golden foliage form, are the only cultivars offered. Propagation is by division in the early spring just before growth begins or by root cuttings taken in the fall.