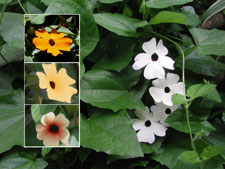 Black-eyed Susan vine is now available in colors besides the traditional yellow-orange.

Keeping vines from becoming a tangled mess and overrunning their neighbors is the challenge we face whenever we grow them. But the rewards are worth it if you can find just the right spot. One of my favorite annual vines is the black-eyed Susan vine, Thunbergia alata.

Black-eyed Susan vine is a heat-loving tropical vine from southeastern Africa where it grows as a perennial, producing vines capable of reaching 20 feet long.  It belongs to the acanthus family so is kin to Aphelandra, shrimp plant and Ruellia.

Thunbergia is grown in gardens as a frost-tender annual vine where it usually makes 5 pr 6 feet of growth in a season. The opposite, triangular leaves are usually about 4 inches apart on the slender twining vine. The petioles are as long as the leaf and have a pair of flattened wings (alata means wing in Latin).

Black-eyed Susan vines are aptly named because the two inch diameter, flat five-petaled yellow-orange flowers have a conspicuous, pencil sized black tubular throat in the center of the field of color.  White, peach, apricot and even pinkish colored forms are not available from the seed companies.  A single blossom is produced at each node with its base enclosed in a pair of four-angled leaf like bracts.

The generic name for black-eyed susan vine comes from Carl Thunberg (1743 - 1828) a Swedish doctor employed by the Dutch East Indies Company. Thunberg was a student of Linnaeus who explored southeastern Africa during 1772 and 1773 but became more famous for his description of Japanese plants a decade later. He sent plant specimens back to colleagues in Sweden who established the genus in his honor in 1776.

Thunbergia alata was not identified until the 1820s when an Austrian botanist, Bojer Wenzel (1796 - 1856), collected it as he traveled through eastern Africa and Madagascar.

Wenzel is best known for collecting seeds of the royal inciana in Madagascar and starting this tropical legume on its way to become the most common of all tropical flowering trees.

Black-eyed Susan vine is easy to grow from the pea-sized seeds. If you wish to start your own plants, plant the seeds on a sunny windowsill about two months before they are to be planted outside.

In the garden, give them a moist, fertile location in full sun or light shade. Like other members of the acanthus family, black-eyed Susan vine wilts quickly if it gets dry.

As it begins to get dry, it shows an exaggerated afternoon wilting that disappears as soon as the sun goes down. It can be grown in hanging baskets or mixed containers, but its nature is to climb so it seems to bloom best when allowed to climb up a trellis. Trimming back long shoots keeps it under control and concentrates the blooms.

Spider mites are a common problem during the hottest part of the summer. This problem is made worse if the plant is allowed to get too dry.