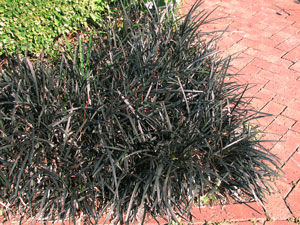 Johnny Cash, the Arkansas native nicknamed “the man in black”, probably got lots of suggestions during his life from fans regarding cool black-colored things he might like that are usually seen in other colors. Were I to have been asked to recommend plants for his garden, one would have most assuredly been black mondo grass (Ophiopogon planiscapus ‘Nigrescens’).

Mondo grasses and liriope species are closely related – in fact, so closely related that botanists have coined the term “liriopogon” as a catch-all term to describe them. Both are staples of gardens of the southeastern states, including Arkansas. Both genera are grass-like plants that eventually form thick sod and share a common range of distribution in southern China, Japan and in wide swaths of Southeast Asia. Long considered a member of the lily family, they are now separated out into the ruscus family.

Liriope is the larger of the two genera, with plants usually over a foot in height with broader leaves, while Ophiopogons usually are less than a foot tall, with leaves half the width of Liriope. Flowers too are different, with Liriope flower scapes held above the foliage, while Ophiopogon bloom scapes are mostly hidden in the foliage.

Black mondo grass is a 6- to 12-inch tall stemless evergreen groundcover that produces purple-black to black leaves that are one-quarter of an inch wide. Plants are shorter and more nearly black when grown in full sun. The lower leaf surface is usually lighter in color, and often purplish black in color. Quarter-inch wide, nodding pink to whitish-purple flowers appear in late summer on arched scapes. Berries are bluish black.

While all of the 54 species of Ophiopogons that have been described spread by expansion of the underground stolons, the rate of spread varies considerably. The most frequently cultivated mondo grass, Ophiopogon japonicus, spreads quickly and will soon form thick, impenetrable mats. The spread of black mondo grass is on the other end of the spectrum, and incredibly slow. It is not uncommon for clumps to require three years before they show their first signs of enlargement. This slow rate of growth makes them expensive to buy, and not terribly practical as a groundcover plant.

In the wild, O. planiscapus is green-leaved like any respectable plant. The black-leafed selection is from a Japanese clone called ‘Ebknizam’ that has been given the trade name “Ebony Knight”. It is unclear if the cultivars sold as ‘Arabicus’ and ‘Nigrescens’ are selections of this one clone, or slightly different variations. According to Tony Avent, the North Carolina nurseryman, these black-leafed forms were first introduced by a California nursery in 1960. Typically, plants are propagated by division, but the black-leafed characteristic does come true from seed, so some variation in form can be expected.

Using black mondo grass in the garden must take into account its slow growth rate and strong potential to startle the visitor. Combining the striking black leaves with yellow-leaved plants would create a strong contrast. While it will grow in the shade, its black leaves tend to make it disappear in low-light situations. Black mondo grass is hardy in zones 6 through 10. It should be planted in a rich organic soil and kept watered during dry weather. It is an easy-to-grow plant, just very, very slow.