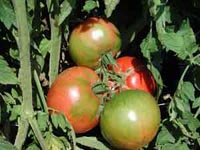 Big Boy is a large-fruited F1 hybrid that has maintained its popularity for over 50 years.

Agriculture has gone through a number of technological revolutions, but few have been as dramatic as was the introduction of hybrid seeds.  While hybrid corn is the classic crop used to explain how hybridization works, I thought the Burpee’s Big Boy tomato might make a good example.

Once the significance of Mendel’s law of inheritance was understood at the beginning of the 20th century, it only took a few years for a workable system of hybrid seed production to emerge.  Corn, because the male flowers are so conveniently large and easy to remove, became the first crop to be reproduced extensively by hybridization.

This early work was complete by the end of World War I; hybrid corn seeds were widely available a decade later.  These new hybrids offered increased yields of about 30 percent over older, conventional line-produced seeds, so farmers were quick to adapt the new technology.

The use of hybridization in vegetable and flower crops was slower to develop.  An old Burpee catalog describes their first significant hybrid as a marigold offered in 1939.   In 1942, Dr. Oved Shifriss (1915-2004), was hired as the director of research for W. Atlee Burpee & Company.  He was a vegetable breeder who added a dozen early hybrids of cucumber, eggplant, cantaloupe, watermelon, and the most lasting of all, the Big Boy tomato which appeared in 1949.

Big Boy, with sweet, fragrant, red, smooth-skinned fruit that can weigh a pound or more, is one of the most popular tomatoes.  Experts often list it amongst their top five all-time favorites.  The plant form is indeterminate, but it is bush-like in habit, a strong grower and blessed with good disease resistance.  Big Boy was Burpee’s second hybrid tomato, but the vigor of this introduction was revolutionary and ushered in the modern era of tomato breeding. Shifriss was born in Ein Ganeem, a town in present-day Israel, where his father had emigrated from the Ukraine.  Shifriss immigrated to the U. S. in 1936. He found a job at Burpee but then left in 1950 and returned to Israel. In 1958, he joined the faculty at Rutgers University in New Jersey as a geneticist, using ornamental gourds as his test plant.

Because Big Boy seed is still being produced, its exact parentage is a trade secret so giving the makeup of the hybrid is not possible.  Hybrids are crosses between two inbred lines that have recognizable differences.  If a good marriage is created, hybrids can have significantly increased yield and vigor, a term we call hybrid vigor.

In corn, it's easy to illustrate how hybrid vigor works.  The afore mentioned increase in yield resulted from crossing lines with long, skinny ears with lines that had short, fat ears with more rows of seeds.  The hybrids produced long ears with more rows, both dominant traits.

We can only speculate what Shifriss used in his hybrids, but Ball hints that one of the parents was an heirloom selection from the Odessa region of the Ukraine, the ancestral home of the Shifriss family.

By carefully studying plant types and understanding which are dominant and recessive traits, the breeder can begin to make crosses that assemble these characteristics into the hybrid progeny.  Once the perfect parents have been identified, hybrid seed is made by hand crossing the two parents.

Because of all of the hand work involved, hybrid seeds are produced in the third world where hand labor is cheap.  Central America, India and Kenya are the current countries where much of our hybrid seed is produced by the six or so mega-seed companies that provide all of our garden seeds.   Because of the hand labor required to produce hybrid seeds, it's always more expensive than seeds grown as an inbred line, usually three to10 times more costly.

Unlike Big Boy, a superior introduction as attested by its long run of popularity, not all hybrids live up to their billing.  As gardeners, we want plants that have good local adaptability, and sometimes an inbred line will be better adapted than a hybrid.  A few plants -- for example petunias -- are only available as hybrids; their inbred lines having so little vigor that they are not considered worth growing.

Gardeners often want to save seeds.  While this works just fine with an inbred line, it is an unrewarding experience with hybrids.  If seeds are saved from a hybrid plant, segregation of the genes occurs in the F2 generation.  Instead of being remarkably uniform, the most salient characteristic of hybrids, the population will vary wildly between the two extremes used to create the hybrid.