FAYETTEVILLE, Ark. -- Perennials, according to the accumulated store of garden knowledge, live, more or less, forever. In reality forever is a really long time with most perennials having a short survival cycle, oftentimes live just a few years unless the plant is dug, divided and relocated. 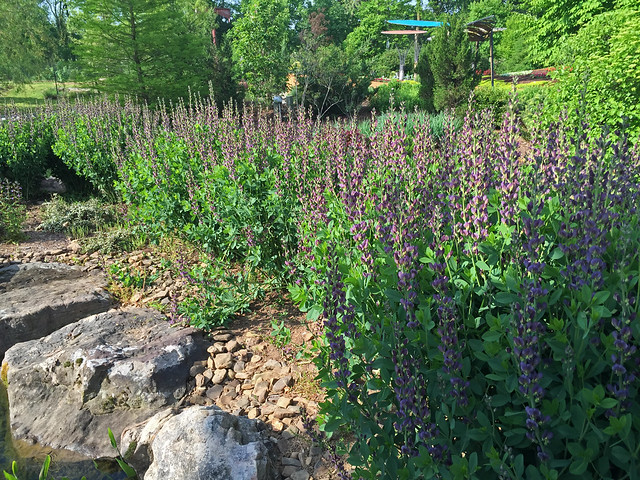 Being a lazy gardener I’m especially fond of perennials that just keep on keeping on without having to be lifted and divided.  The Baptisias or False Indigos are just such plants. In recent years a spate of new hybrids has been introduced to the garden trade that redefines what they look like in the garden.

Baptisias are long-lived herbaceous perennials that grow from a compact but expanding crown.  Tony Avent from Plant Delights Nursery in Juniper Hill, North Carolina, one of the early proponents of the renewed interest of Baptisias in the garden, sought out a treatise on the genus written in the 1930s that gave accurate locations of many of the wild species being described. After 60 plus years some of these plants were still growing exactly where the botanists described them.

About 20 species are known -- plus many natural hybrids -- in the central and eastern states with all native to the United States. The stout stems emerge in an a crowded mass in mid-spring and reach 3 to 5 feet tall and wide, depending on the site and the makeup of the hybrid. Leaves are trifoliate, clean, densely packed on the stems and often gray-green in color and quite attractive giving the plant a shrub-like look during the summer.  At the end of the season the foliage turns gray – black and persists into the winter. The inflated, 2- to 3-inch long woody, green-turning-to-black capsules are produced along the blooming spike and persist through the winter. 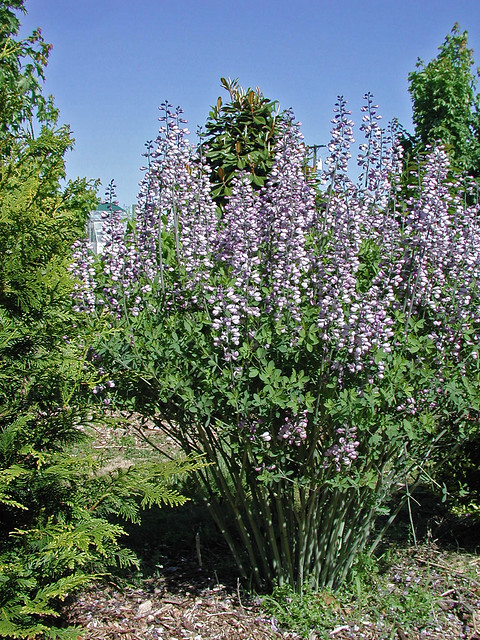 Purple Smoke Baptisia is a smoky blue hybrid found in the early 1990s as a natural hybrid at the North Carolina Botanical Garden in Raleigh. (Image courtesy Gerald Klingaman)

The natural flower color range of the species is blue, white, creamy yellow and bright yellow. By combining these color choices the hybridists have created some new color combinations such as ‘Dutch Chocolate’ that has an overall brownish look that I would guess is probably a cross between the blue B. australis and the yellow B. sphaeracarpa. ‘Purple Smoke’ has a blue-gray cast to the flowers and resulted from an accidental cross between B. australis x B. alba.

These hybrid plants show good hybrid vigor, uniform growth and were selected for good floral display.  ‘Dutch Chocolate’ Baptisia is one of the Decadence® Series of false indigos developed by Hans Hansen who is responsible for new plant development for Walters Gardens in Zeeland, Michigan, one of the nation’s largest growers of perennial garden plants. ‘Dutch Chocolate’ was released in 2011through the Proven Winners marketing group and has been planted across the nation. The 10 plants planted at the Botanical Garden of the Ozarks in Fayetteville can only be described as stunning, especially after only five years in the ground, even though I’m personally not fond of the brownish hue of the flowers that seems to get lost in the garden.

Hansen and Avent made many collecting trips to Oklahoma and Texas during the late 1990s and brought back to their respective locations plants of known characteristics. It took Hansen 14 years to breed, trial and select ‘Dutch Chocolate’ Baptisia. Hansen became interested in plants as a child, often asking for plants for birthday and Christmas presents. In high school in the late 1980s he began breeding lilies; by the early 1990s he had moved on to Hostas.  Since then he has added half-dozen other species to the mix of new plant species that he works with.

Hybrid baptisias are large, shrub-like perennials that need plenty of room to grow. They are natural prairie plants and do best in full sun in any reasonable garden soil.  Expect them to take at least two years from when they are planted to show what they can do in the garden.  Then make sure they have room to expand, for expand they will.

Size can be controlled on false indigos by cutting the plants back to the ground as soon as flowering is complete. To do so will remove the black seed pods but plants can be maintained at about half their actual height if a more compact plant is desired for the location. Baptisias have tremendous drought and heat tolerance and, because they are legumes, fix their own nitrogen.  What a perfect plant for a lazy gardener.