Plant of the Week: Satsuki Azalea 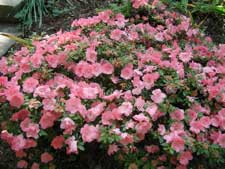 Wakaebisu is an example of the beauty Satsuki azaleas can add to the garden in late spring.
We azalea lovers are always puzzled why all gardeners don't drool over these flowery shrubs like we do. An oft-heard argument is that they just don't bloom long enough to justify the room they occupy in the garden.

While it's true that blooms of an individual plant only last two weeks, the azalea blooming season can be extended from March into May and June by selecting late-flowering kinds such as the Satsuki hybrids.

Satsuki azaleas are evergreen azaleas from Japan that originated as natural hybrids between Rhododendron indicum, a plant that occupies mountainous stream sides,and R. eriocarpum, an inhabitant of the alluvial plains at the base of the mountains.

These species occur on the southernmost four islands of the Japanese island chain. Natural hybrids are found where these two species come together. Japanese nurserymen have collected the showiest of these for at least 400 years.

Japanese gardeners distinguish between two kinds of azaleas - the Tsutsuji and the Satsuki. The Tsutsuji bloom about 30 days after the spring equinox with flowers produced before new growth begins. The Satsuki azalea, whose name translates to “fifth month,” blooms 60 days after the spring equinox. More than 500 cultivars of Satsuki azaleas have been described, with almost all having unfamiliar-sounding Japanese names.

While most Satsuki azaleas are low and slow-growing mounded shrubs in the 3- to 4-foot tall range with a spread one-and-a-half times their height, some form upright bushes and others are trailing groundcovers. Flowers appear amongst the new leaves and are mostly single, 2-to 3-inches across and produced in shades of pink, white, salmon or red. Two dozen flower color pattern combinations are used in Japan to describe the intricate color markings of the groups which range from picotee, flecked, freckled, sectioned and various combinations of these.

A few Satsuki azaleas made it into western gardens in the early 1900s, but it was Ben Morrison, the famous azalea breeder for the U. S. Plant Introduction Service, who introduced 53 named clones during the prewar years of 1938 and 1939. These early introductions were used as parent material in 150 of his Glenn Dale azalea hybrids and about 50 of his Back Acre hybrids.

In 1978 and 1979 Barry Yinger, then working for the National Arboretum in Washington, D.C., introduced an additional 387 named clones that are beginning to find homes in American gardens.

Satsuki azaleas are not as winter hardy as the Kurume azaleas, so most experts recommend growing them in zones 7 through 9. While they will grow in similar shade conditions as the more familiar early-blooming azaleas, the Satsukis put on a better display if given more sunlight.

Ideally, locate them where they get good light or even direct sun during the morning hours and have afternoon shade. Locating them in areas receiving afternoon sun shortens the blooming time for a cultivar.

As with all azaleas, Satsuki azaleas require an acidic, highly organic soil that is well drained yet never allowed to become completely dry. Planting in raised or mounded beds using pine bark tilled into the existing soil makes a suitable planting medium for azaleas.

Commonly offered clones, often found at mass-market outlets, include 'Gumpo,' 'Shinnyo no Hikari,' 'Kimi no Hana,' 'Wakaebisu,' and many others.