Arkansas Blue Star gives you the durability of the best natives and the grace and charm of a well refined perennial, all while providing an effective display from spring through fall. For these reasons, and because it’s not well known among gardeners, Arkansas Blue Star was named as an Arkansas Select Plant for 2001. 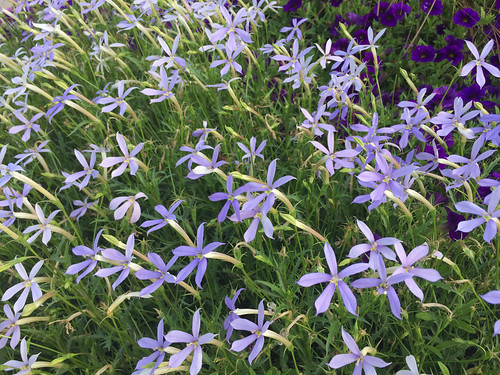 Arkansas Blue Star grows up 3-feet tall with its stems arising from a crown. The graceful branches arch outward from the crown and spread 4-feet wide on mature plants. The leaves are linear, up to 3-inches long, and almost grass-like in appearance.

In the summer, these lacy plants provide an interesting textural foil for other plants in the garden. In the fall, the foliage turns a golden yellow and persists for about three weeks. The plant is most beautiful season in the fall.

Flowers appear in late April and May. They’re often described as "sky blue," but that would have to be on a very hazy day because they tend to be light blue to almost white. The flowers are borne terminally in a panicle and they hide in the foliage at the top of the plant.

Individual flowers have the typical 5-pointed star associated with the Amsonia and are about three-fourths of an inch across. The seed pod is an elongated, cigar-shaped follicle about the size of a large toothpick. 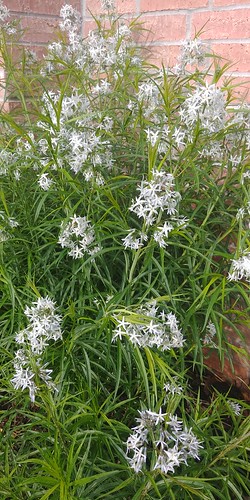 Gardeners familiar with Arkansas native plants are most likely familiar with the other Blue Star, A. tabernaemontana. The common Blue Star has a wide range of distribution throughout the Eastern woodlands. It has a much more robust habit than the Arkansas Blue Star. It has grown almost a foot taller and twice as wide in the three years it’s been grown in the Horticulture Garden on the U of A campus. But it only shines when in bloom and has no fall color.

Amsonias belong to the dogbane family along with Vinca minor and the common periwinkle. Like many members of that family, they have a milky sap. The sap of some species in the family contain toxic alkaloids that have been used medicinally and can be toxic to livestock. For the gardener, this is good. Amsonia are often listed as "deer-proof" plants.

Arkansas Blue Star’s native range is the Ouachita mountains of Arkansas and Oklahoma. The species was only recognized as distinct in 1943 when a botanist from the Missouri Botanic Garden grew material provided by Leslie Hubricht, an expert on fresh water mollusks. Hubricht had been on a collecting trip for the Field Museum of Natural History in Chicago the year before when he ran across the unusual Amsonia in Garland County.

Like most Amsonia, this species is adapted to any well drained site in either full sun or shade. It does best with an acidic pH but is not generally considered finicky about soil conditions. The first year after planting, Amsonia hubrichtii will look a bit spindly and unpromising. This establishment period can be shortened by amending the soil with lots of organic matter and providing good cultural management.

Allow the clump a couple years to fully expand and its beauty will be a thing to behold, especially in the fall.