Plant of the Week: Alumroot, Arkansas 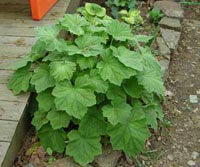 A number of Arkansas native plants have found their way into my garden. Pampered garden life can have a dramatic impact on the size and shape of our native vegetation.

Botanists consider Arkansas alumroot an endemic. Of the 2,400 or so species that occur naturally in the Arkansas, 10 are endemic and found nowhere else in the world. The differences separating them as new and unique to science are usually not earth shaking but relatively minor variations on the general theme of the plant.

Arkansas alumroot has the general characteristics of other alumroots except for the preponderance of hairs on its leaves. Also, it flowers from late August until the first hard frost, unlike most species that are spring and early summer bloomers.

The flowers are white, individually small but produced in mass on a 3-foot tall bottle brush inflorescence held above the foliage. The leaves are a mid green, softly pubescent and notched.

The original H. villosa was described from material collected in the Appalachians by the French plant collector Andre Michaux in the early 1800s. He assigned the species name "villosa" as a reference to its hairy leaves.

Arkansas alumroot is found in the Ozarks and in one Ouachita county, usually growing on shaded sandstone bluffs with seeps of moisture. It's one of about 40 species of alumroots found in North America . Our plant was first collected in August of 1895 and identified as something new by botanists working at Harvard.

In the wild, Arkansas alumroot is a smallish plant usually found growing in the crevices of cliff faces. As plants age they develop finger-sized rhizomes that slowly creep out from the crown of the plant. Most I've seen in the wild could be covered by an upturned mixing bowl and not overly crowd the foliage.

But, when moved to the garden, it shows what it can do when given good soil and a bit of room for self expression. Smallish plants in the wild turn into giants with foliage mounds 18 inches tall and 2 feet across. I shared a plant with a friend and she had to move it after a couple years because it was crowding her hostas! Of the other Heucheras I've grown, this is about twice as big as any other species.

Arkansas alumroot's preference for crevices in the wild can be traced back to its family relationships. As a member of the saxifrag family (which translates from Latin as "rock breaking"), it's only doing what comes natural.

Having grown my plants from seed I think I understand why it grows in the moist seeps in the wild. I planted seeds in mid-winter in the greenhouse and they germinated quickly, but the seedlings were slow growing as the fine roots plumbed the depths of the flower pot. The seedlings were not large enough to transplant for ten weeks, and even then they were small.

The rocky crevices, too steep for oak leaves to accumulate and always exposed to a steady supply of moisture and light, provide excellent nurseries for the young seedlings. Though the crevice provides a happy home, it restricts root growth of older plants and keeps them small. The same principle is used in bonsai to keep plants small.

The evergreen nature and large size of Arkansas alumroot makes it a potential for use as an evergreen groundcover in the shaded landscape. Once established, it is drought tolerant and easy to grow.