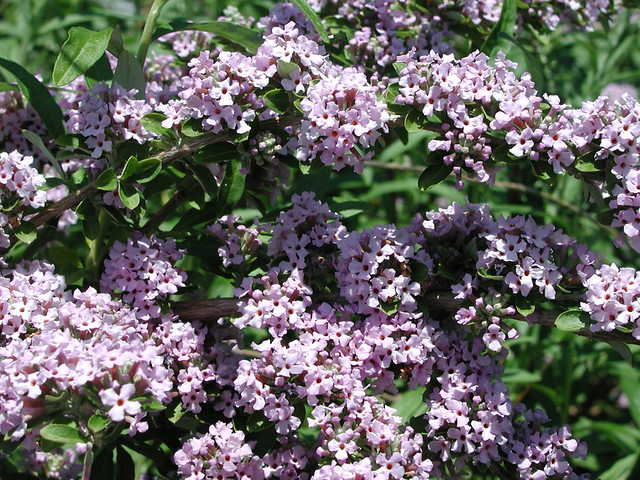 The alternate leafed butterfly bush is one of about 100 species of butterfly bushes described in Asia, Africa and tropical parts of the Americas. This species is native to Northwestern China where it grows along sunny, summer-dry creek banks at elevations of 3,000 to 10,000 feet. It is the most winter hardy species of buddleia found in cultivation and is hardy from zone 5 through 9.  Most sources list the plant family as Scrophulariaceae but the Flora of China considers it to be in the Loganiaceae.

The deciduous woody shrub has a broad spreading form with arching branches and can reach 10 feet in height with a spread up to twice its height. Though potentially a large shrub, it is seldom seen in these larger sizes and is easily maintained in a manageable size by pruning.  Leaves are willow like to 5 inches long and have an alternate leaf arrangement on the stem unlike most buddleia. Leaf color is a gray-green during the summer and is more attractive than most other buddleias. ‘Argentea’ is a pubescent form with a gray-white summer appearance.

The sweetly scented, lilac-colored, four-petaled tubular flowers are produced in short panicles from lateral buds along the stem. The flowers are so densely packed with blossoms they often encircle the stem making it appear as one long panicle.  The fragrance of this buddleia is probably less intense than the more common butterfly bush but it is still quite pleasant.  Some inventive nurserymen call this plant “Fountain Butterfly Bush” because of the cascading branches covered with blooms.  Because the shrub blooms on old growth, it does not repeat bloom during the summer.

This species was introduced into cultivation in 1914 when a team of British plant explorers, Reginald Farrer (1880 – 1920) and William Purdom (1880 – 1921), teamed up to explore for rock garden plants in the Tibetan borderland. Purdon had spent three years previously in China collecting plantsm but it was his collaboration with Farrer that was the most productive.

Farrer is usually given the credit for the introduction of this and many other plants because he wrote the book (On the Eaves of the World, 1917) and financed the expedition. Both men died in China; Farrer from an illness contracted while collecting, and Purdom died following a minor operation in Beijing.

The alternate leafed buddleia should be considered as a forsythia-sized shrub and treated accordingly. It can be added to the back of the perennial border or combined in a shrub border with other large shrubs.  Its size can be easily controlled by pruning back after flowering.  Pruning should not be as extreme as done on forsythia, instead selectively remove unwanted branches every spring to shape and direct its growth. It grows best in a sunny, well-drained site and once established has good heat and drought tolerance. It is bothered by no serious pest problems and does not appear to reseed.