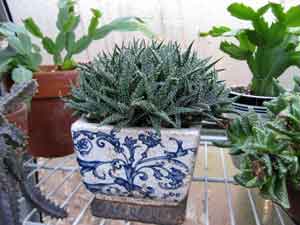 I find all aspects of plants interesting, but am especially intrigued by the back story involved in bringing them from obscurity to a prominent position on my windowsill or in my garden. Even in the modern “information age,” tracking down the details is often fraught with challenges because the plant often moves forward into commerce with little regard to the circuitous path taken to get it noticed. A plant I have loved since first seeing it in 1998 at the Arkansas Flower and Garden Show in Little Rock is Aloe 'Pepe', a dwarf windowsill succulent I have done my part to popularize by sharing divisions with many fellow gardeners.

Pepe Aloe is a dwarf rosette-forming hybrid producing individual rosettes about 2 inches in diameter, with numerous offsets of similar size. Within a few months, the plant forms a domed habit of growth that gets larger as the rosettes continue to enlarge in accordance with the pot size used to grow the plant. In a shallow 6-inch bulb pot I've had the plant completely fill the pot in about two years but be no more than 3 inches tall. Its dark green leaves are fleshy, triangular and tipped with soft, silvery bristles, giving it a kind of speckled look.

For me, Pepe has been reluctant to bloom, but the beauty of the plant is the tight buns of growth, not the slender foot-long scape of orange-red flowers. Though long considered members of the lily family, modern taxonomic treatment has assigned the 300 species of aloe, all of which are native to Africa, to the asphodel family.

Pepe Aloe was developed by John Bleck, then working as the plant science greenhouse manager for the University of California at Santa Barbara. Bleck received a small grant from a University endowment fund to cross various species of Aloes with the aim of producing small, compact windowsill or tabletop specimens for the horticultural trade. His hybridization work was mostly conducted between 1979 and 1982, and for Pepe involved crossing two species native to Madagascar, A.descoingsii x A. haworthioides. 'Magoo', 'Cha Cha', 'Firefly', 'Lizard Lips' and 'Blimey Limey' are some of the other dozen or so dwarf hybrids he introduced from his program.

Pepe is an easy to grow plant said to be much more vigorous than either of its parent species. I acquired my plant when the Central Arkansas Cactus and Succulent Society had a plant sale at the Flower and Garden Show in Little Rock. I purchased the plant and then carried it back to the booth where I was stationed, using it as table decoration. During the next two days, show visitors came by and admired the plant, so I dutifully broke off a rosette or two and shared the divisions with them. It is so free-branching and easy to grow that I have been sharing divisions ever since.  It is a perfect pass-along plant with few demands, so I like to think I have done my part to position this cute little plant on windowsills across the state.

Pepe aloe, because it is so small, should be grown in a smallish pot. A 4-inch pot is a convenient size container that is well proportioned for the small size of the plant. I have also used shallow, 6-inch long bonsai dishes for the plant. Every three years or so, I divide my plants and allow them room to regrow. Pepe is not picky about soil, so I have taken to using just a good, high-quality greenhouse growing mix. I occasionally fertilize my succulent collection, but feeding is a hit-or-miss proposition. Pepe, like most succulents, is a low fertility plant.

In the summer, I move my plants to a lightly shaded deck in front of the house and mainly let rainfall do the watering, only supplementing it with water from the tap when we have been rain-free for longer than two weeks. I have overwintered plants in my 50-degree cool greenhouse and on the coffee table in the living room. Both locations have worked well. Plants used inside on my coffee table come out of the winter looking just like they did going in, making Pepe one tough, dependable plant – for I'm not one to fuss over indoor plants, and usually watering is sorely neglected.