Plant of the Week: Snow-Wreath, Alabama 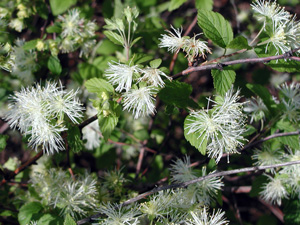 The Alabama snow-wreath (Neviusia alabamensis) growing in my shade garden is breaking bud and will soon be in bloom. I have had a column about it on my to-do list for a long time but have held back because I suspected – undeservedly so, as it turns out – that there wouldn’t be much to say about this thicket-forming native shrub.

Alabama snow-wreath is a member of the rose family that grows as a deciduous shrub with arching branches, and attains a height of 3 to 6 feet, and a spread of 6 feet. If grown as a free-standing shrub, it has a rounded outline, but in nature it grows in a dense, hedge-like thicket with arching and sometimes ascending branches, forming an almost impenetrable mass. Stems are slender, brownish and pubescent during the growing season. White stolons the size of soda straws are produced from the main trunk in late winter and expand the colony horizontally each year. The long-petioled leaves are 2 to 3 inches long, ovate in outline and marked with a coarse, doubly serrate margin.

In early spring, it produces masses of white pincushion-like flowers along the stems. Individual flowers lack true petals, with the mass of white stamens responsible for the display. Individual flowers are to three-fourths of an inch in diameter and produced in a dense, three- to eight-flowered cluster. Blooms appear in mid-April most years, after the plant has leafed out. Fruit are single-seeded achenes of no ornamental interest. In flower, the shrub is showy, but during the rest of the season, it is of no particular interest.

Neviusia was named by Harvard botanist Asa Gray to honor the Reverend R. D. Nevius (1827-1913), who in 1857 discovered the plant growing below a limestone cliff face on a bluff along the Black Warrior River near Tuscaloosa, Ala. Everywhere it is rare, and even in Alabama it has a very restricted range, being found in only five counties. In Arkansas, it is found in three counties in the central Ozark Plateau. In most other states, it is found in only one or two counties. Until 1993, the genus was thought to be monotypic, but a second species was described growing on Mount Shasta in northern California.

Alabama snow-wreath belongs to a restricted section of the rose family occupied by only two other species, Kerria (yellow-rose-of-Texas) and Rhodotypos (jet bead). These are thought to be relict species that are on an evolutionary downhill slide and disappearing from the flora. The spotty and widely fragmented distribution of Alabama snow-wreath is thought to correspond to the shoreline of the continent about 60 million years ago, when the sea extended up the Mississippi embayment as far north as central Missouri.

Though the Alabama snow-wreath produces seeds, they seem to be little involved in its distribution in the wild. Instead, flood-washed distribution of displaced portions of the root stock seems to be the main means of dispersal. This overreliance on vegetative means of reproduction probably explains the plant’s failure to exploit its native range. Though it has a very restricted range in the wild and is listed on several state lists as threatened, it has proven widely suited to cultivation in a range of environmental settings.

In the garden, Alabama snow-wreath is hardy from zone 4 through 8. It grows best in full sun to light shade in any good garden soil. Though usually found associated with limestone, it grows equally well in acidic sites, provided the soil is loose and friable. It has moderate drought tolerance once established. It is best used as a part of a mixed shrub border. Propagation is easy by cuttings or early spring or late fall division.