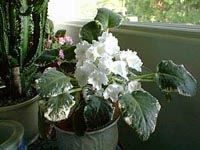 African violets are essentially 20th century plants, first discovered along ravines in deep undergrowth about 1890 in the wilds of equatorial east Africa. Most of the 2000 named selections of African violets now available are derived from the first species discovered, Saintpaulia ionantha . Hobby and professional plant breeders have used all the tricks at their disposal to produce modern types. In addition to traditional breeding techniques, polyploid techniques and interspecific hybridization, breeders have also used the sledge hammer approach - a technique called mutation breeding.

For a breeder to change a plant much by breeding, there must be some variation in the population. This variation can come from natural differences within a species, from variation found in related species, or from mutant forms that occur spontaneously. It has been estimated that for every million cell divisions, one mutation will occur. Most of these mutations have no effect or are detrimental, but occasionally, mutations can be beneficial.

In 1928 researchers discovered that the mutation rate could be increased dramatically by bombarding cells with X-rays. This was soon followed by the use of mutagenic chemicals, things we now guard carefully against introducing into our workaday world. Then we dropped the bomb.

With the explosion of the atomic bombs in Japan in 1945, scientists immediately saw the potential for using radiation exposure in their breeding programs. Using nuclear energy in a breeding program made perfect sense to the government as officials sought to develop peaceful uses of atomic energy. During those naive, post-war years optimism ran deep and all assumed that this awesome new force that had been unleashed in the world was going to do nothing but good.

During the go-go days of the 60's and 70's everything imaginable, including African violet shoots and leaves, were blasted with doses of radiation at the Oak Ridge reactor in Tennessee . It became standard course amongst many breeders of a wide range of crops to send their cuttings or seeds in to be zapped, on the odd chance that something good might happen.

As it turns out, this shotgun approach was incredibly inefficient. Gamma rays passing through strands of DNA cause all sorts of changes, but the nature of the change is unpredictable and the genetic stability of the resultant plant is often difficult to control.

One of the common side effects of mutation breeding is variegation. While I don't know for sure the variegated African violet shown was a product of mutation breeding, I do know that variegated forms were produced using this technique. These mutated forms are inherently unstable and difficult to fix in their variegation pattern, so reversions to green or sometimes albino forms are common.

Mutation breeding resulted in a worldwide release of over 1000 new seed-propagated plants between 1963 and 1991, the heyday for the use of the technique. Most of these plants were farm crops, with rice, soybeans and barley the most common. The number of vegetatively propagated plants - those increased by cuttings or grafting - is undoubtedly equally large.

The United States never embraced mutation breeding the way other parts of the world did. China , India , and the USSR were especially fond of this breeding approach, while US scientists tended to prefer techniques that produced more predictable results. Mutations, regardless of how they were formed, have no carryover effect and cannot produce further mutations amongst other plants or gardeners working with them.

Variegated African violets require the same growing conditions as all-green selections, but they are a bit slower because they contain less chlorophyll. Give them a bright area with indirect light, fertilize regularly and maintain uniform moisture, and they will be happy as clams. The problem with their genetic instability arises when leaf cuttings are used to start new plants. Depending on where the new plantlets arise, they can be more or less variegated than the original plant.