Monkshood, Wolfsbane in the home garden
skip to main content

Plant of the Week: Monkshood, Wolfsbane in the home garden

Monkshood or Wolfsbane (Aconitum napellus) is the latest plant in the garden world that has generated some media-fueled hysteria because of its poisonous properties. 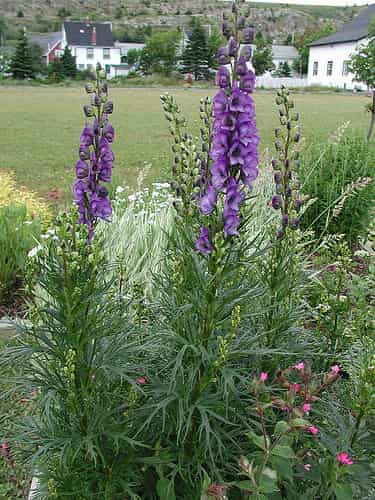 Wolfsbane/Monkshood is a long lived tuber forming herbaceous perennial of the ranunculus family that is most closely related to delphiniums.

About 100 species are known with five native to North America. The genus grows in cool, moist mountain regions with the highest concentration of species found in high elevations regions of Asia. This species is native to Europe.

Growth habit and details about Wolfsbane

Stems of this perennial grow 2-4 feet tall with flowers appearing from midsummer until fall. Leaves are palmately compound with 5-7 deeply incised segments. The below-ground tubers are fleshy with the species epitaph translating as “little turnips.”  All parts of the plant are poisonous. The name “wolfsbane” comes from the old European practice of poisoning wolves with meat scraps laced with Aconite roots.

The showy blue-purple flowers are produced in terminal panicles up the stem. The covering hood of the flower is a domed modified sepal that shrouds the inner parts of the flower. In nature aconite is pollinated by bumblebees so the volume of the hood is sufficiently large to allow access to the bee.

Since ancient times monkshood has been known for its poisonous properties.

The poisonous principle has been used to coat poisonous arrows, and in Alaska, harpoons for whale hunting. The drug is fast acting – usually causing death within a couple hours if sufficient dosage is consumed – by stopping the heart.

Monkshood has been the favorite poison of suspense writers for the past several centuries and its use continues in the plethora of modern day who-done-its on TV serials. In at least two cases of life imitating art, monkshood has been involved in intentional poisoning twice since 2010. In another case a Canadian actor, mistaking the tubers of a wild monkshood for wild parsnips while on a camping trip, died from the epicurean miscue. In an older case roots of monkshood were mistaken for horseradish with disastrous results.

Is it dangerous to grow Wolfsbane?

Having monkshood in your garden amongst all the other theoretically poisonous plants — everything from azaleas to potatoes — is not by itself dangerous.

Brushing against the plant or even accidental ingestion of a small amount of leaf tissue is not going to be fatal.

As with any poison, the dose administered is what causes the problem. Not planting any potentially poisonous plant with easy to confuse tubers in the vegetable garden is a common-sense precaution. And, obviously, don’t assume anything green is good to add to a salad.

Monkshood is not especially happy in the South. Occasionally it is seen in north Arkansas gardens in the perennial border where it does best in bright locations but with afternoon shade.