What to make of a plant called “purple heart”? Nothing about the plant is heart shaped, but it certainly is purple. Purple is an interesting color. It ranks high with women but for men it is far down the list of favorite colors. Even with women, the popularity of purple rises as they age.  Purple heart (Tradescantia pallida ‘Purpurea’) is an interesting little plant that can satisfy your need for purple. 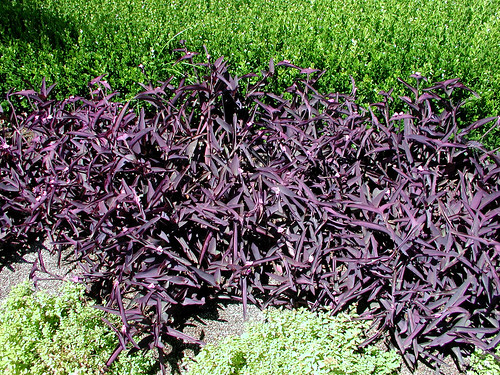 Purple heart is a member of the spiderwort family that consists of about forty genera and 750 species worldwide. The genus Tradescantia, to which purple heart belongs, contains 75 species of New World plants distributed from Canada to Argentina. This species is native to Gulf Coastal region of Mexico from Tamaulipas, where it was first discovered, to Yucatan.

It is a juicy, sprawling evergreen perennial that grows about 8 inches tall and 18 inches across.  The clasping, 1-inch-wide and 5-inch-long leaves alternate on stout stems and colored bright purple. The species epitaph, pallida, translates from Latin as “pale,” which is a fair description of the original species, which has gray-green-purplish colored leaves that have a washed out appearance. Only the cultivar “Purpurea” is grown commercially.

Inch wide, three-petaled pink flowers are produced at the ends of branches in a pair of boat-like bracts. The name Moses-in-a-boat is used with some spiderworts because of this floral bract. Flowers remain open only in the morning, but are produced throughout the growing season.

This species was first collected by Edward Palmer (1831-1911), one of the principle plant collectors working in the American West during the second half of the 19th and early 20th centuries. He collected for botanical institutions around the world and traveled extensively in the Gulf Coast region from Florida to Mexico, but also made many trips into Arkansas. His collecting record shows a man who constantly kept moving and one who saw the advantage of revisiting the same location at different times of the year to see what else he might find. The wild form of purple heart was collected in 1907, but he had been visiting the region since the early 1880’s.

The common name purple heart probably comes from the military medal by the same name. The modern day Purple Heart medal, awarded to those wounded or killed in action, is descended from the Badge of Military Merit first awarded by George Washington in 1782. After WWI, an effort was made to redesign this award, but it was shelved. In 1931, Douglas MacArthur – a Little Rock native – restarted the process of updating the medal. It was awarded to all who qualified after April 5, 1917. MacArthur was awarded the first of the almost two million medals that have been awarded to date.

Purple heart is an easily grown perennial that will occasionally overwinter in central and south Arkansas, as an annual or as a houseplant in either pots or hanging baskets. It has also become popular as an addition to mixed patio containers. It roots easily, is fast growing and tolerates full sun and drought remarkably well for a plant that is happiest with lots of moisture. It will tolerate moderate shade but the colors will be more washed out in the shade. Plants are reliably winter hardy to zone 8.