Plant of the Week: Sunscald and Southwest Injury | What causes sun scald and southwest injury?

The hottest temperature ever recorded in Arkansas was 120⁰F in Ozark, during the dust bowl drought of 1936.

Hot summertime temperatures happen every year and each summer they can cause damage to tree trunks. These ugly trunk scars, called southwest injury or sunscald, are often confused for one another, but are actually two distinct types of injury. 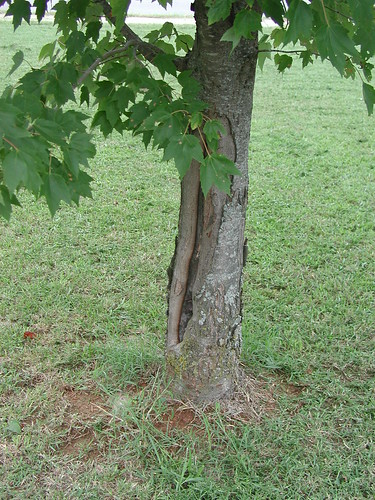 What is Southwest injury?

Southwest injury is a good name for these physiological disorders. They both occur on the lower part of the trunk on the southwest side, typically on young trees. Thin barked trees such as maples, ash, birches, fruit trees and honey locusts are especially susceptible, but even young oaks can succumb to the problem.

The trunk damage is most prevalent on young, recently planted trees that have not developed a thick, corky insulating bark. The damage usually starts a few inches above the ground and extends as high as the first branches.

How does Southwest injury occur?

In classic southwest injury, the damage is done in late winter when the temperatures are below freezing, and the sun strikes the tree, warming a portion of the southwest side of the trunk well above freezing. When the sun sets, the trunk rapidly refreezes and kills the cells. This is a common problem in colder parts of the country but becomes less prevalent as one moves south.

What is bark blasting?

A similar condition called “bark blasting” occurs in late spring, if a hard freeze happens when plants have awakened for the season and sap is flowing in the trunk. If temperatures drop below 22-25⁰F, the sap can freeze and blast a portion (or sometimes all) of the bark off the trunk in a long, vertical crack. This blasting or splitting can occur on any side of the tree. The Easter freeze of 2007 saw a lot of this kind of trunk injury on young trees.

How does sunscald differ from Southwest injury?

But sunscald, the most common kind of tree trunk injury I see in Arkansas, is a summertime problem. Trees are kept cool by transpiration, the evaporation of water from the leaves. If a tree is newly planted or a severe drought occurs, transpiration can be slowed and temperatures in the tree can begin to increase. Not only does transpiration cool the leaves but the flow of water through the tree trunk also cools the trunk.

Temperatures near 140⁰F are lethal to most cells. In drought conditions, established oak trees with thick bark have been measured with temperatures above 135⁰F, so one can only imagine the trunk temperature of a young, newly planted red maple in a blacktop parking lot planter.

How to prevent sunscald injury

Preventing sunscald injury means paying special attention to watering during the establishment period for young trees — usually the first two or three years. Keeping the tree trunk out of direct sunlight during the heat of summer is the first consideration. Retaining as many of the lower branches as possible on young trees, wrapping the trunk with an insulating tree wrap that reflects some of the sun’s heat away or even placing a board on the southwest side of the tree to cast a strategically placed shadow all work. Thereafter, watering during prolonged periods of drought are also important until the tree develops a large enough canopy to shade the tree trunk during the heat of summer.