Plant of the Week: Stachyurus Spiketail

As a plant geek, I’m drawn to the new and unusual plants offered by the nursery trade. The spiketails (Stachyurus sp.) fits the bill because in the past two decades they have been showing up in increasing numbers in nursery catalogs and sometimes even in your local big box store. 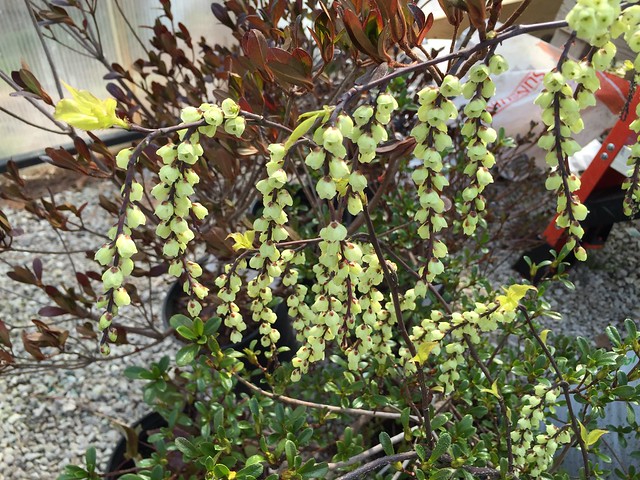 Stachyurus is a genus of eight Asian species in its own family that is most closely related to our native bladdernut (Staphylea trifolia). S. chinensis ranges throughout much of Southern China and Taiwan, where it grows in moist, woodland sites along streams, and sometimes in more upland sites. S. praecox, probably the most winter hardy of the species, is native to Japan.  S. salicifolius, the willow leafed spiketail, is native to Southwestern China.

All of the spiketails are large, mostly deciduous shrubs with a wide-spreading, mounded form. Height is variable but they can grow 6-10 feet tall and twice as wide. Simple lustrous green leaves grow 3-7 inches long and are alternate on the stems with an ovate-lanceolate shape with finely serrate margins. Fall color is said to red to orange but I have seen none on the plants I have observed.

Variegated forms such as the all gold S. chinensis “Joy Forever” and “Goldbeater” and the cream margined “Magpie” add leaf color to the summer garden. S. salicifolia, the willow leafed spiketail, is said to be evergreen in zone 7 but with a minimum low of only 12ºF last winter, my plant dropped its leaves but is now leafing out.

The name Stachyurus translates as “spike tail,” a reference to the unusual way the plant produces its flowers.  In the fall, 4-7 inch-long, drooping spikes are produced from flower buds formed at the base of the leaves. These hang there over winter and open early in the spring into nodding, bell shaped yellow-green blooms that dangle like elaborate ear rings. The Japanese spiketail’s specific epitaph translates as “very early.” In north Arkansas, they usually bloom in late March and are subject to injury by late freezes in unprotected locations.

The spiketails have been known in the West since the 1830’s, when Philipp von Siebold collected specimens in Japan while stationed there as a physician. It and the other species were imported to Europe during the last half of the 19th century with E.H. Wilson, the intrepid Chinese plant explorer, introducing several forms. But the marginal winter hardiness lead to them being largely ignored in the United States because most of the institutions likely to import them were in colder regions, where the plants died when planted outside. It was not until the early 1980’s when the U.S. Department of Agriculture and several botanical gardens made trips into China that gardeners expressed renewed interest for these plants when grown in botanical collections in milder regions.

Spiketails are probably best used as woodland plants where they should be grown in humus rich soil that is not allowed to get too dry during the summer.  They will grow in full sun but some protection from the hot afternoon sun is probably best, especially for the variegated forms.  Winter hardiness is subjective. They are often listed as hardy in zones 6-8, but the zone 6 hardiness is questionable.  At the St. Louis Botanical Garden, they have planted six accessions and only one remains alive out of doors.  So planting it beside a south wall or in a sheltered courtyard – provided there is sufficient room – is a sensible precaution in colder regions.