One of the advantages of getting old is that I can take college classes for free. This fall I’m sitting in on Dr. Fiona Davidson’s History of Geography, a class that connects the lines between all those explorers that have always fascinated me and the wreckage many have left in their wake. Every plant we grow, such as the African spear plant or cylindrical leafed snakeplant (Sansevieria cylindrica), was discovered by someone and this simple event set in motion the butterfly effect that changed the world in some small way. 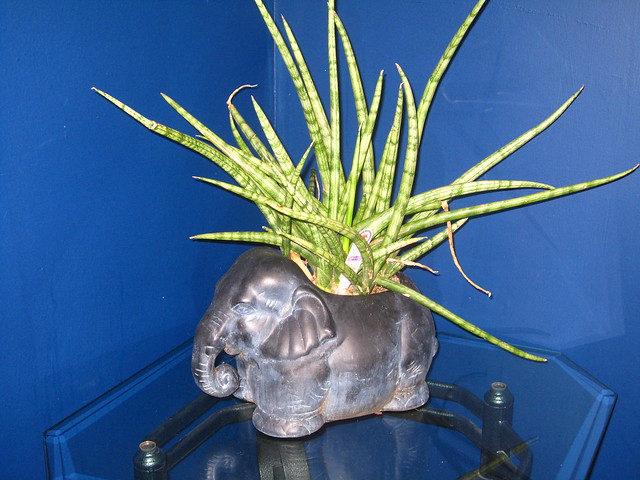 The cylindrical leafed snakeplant from Angola is one of about 80 species of Sansevierias that have been described, with most growing in tropical Africa or southeast Asia. They are currently considered members of the asparagus family but were long lumped into the overly large lily family. The name “snakeplant” makes reference to the shallow rhizome, often half buried in the soil, that snakes away from the original plant in all directions.

The form of the cylindrical leafed snake plant resembles that of the common green leafed version of snakeplant, except in this species the leaves never flatten out but instead elongate like a pointy tipped living rod. The leaves may be as large as your thumb and to 2 feet long, but are usually somewhat smaller in size. The eight leaves on new rosettes splay themselves out flat with the cylindrical leaves meeting up at the congested base. In the typical snakeplant, the leaves are produced in a circular rosette whereas in this species the rosette is flattened.

In midwinter it is not unusual to have old plants send up an unbranched stem to two feet tall bearing numerous inch long white flowers. The tepals are narrow and do not flare outward and are not especially pretty, but they do have a sweet fragrance.

The first snakeplants were described in the 1780s from plants growing in gardens, so quite a bit of confusion surrounds the naming of these plants. S. cylindrica is distinct enough that its discovery and introduction into cultivation in the 1820s is well documented. Wenceslas Bojer (1795 – 1856), a Bohemian (Austrian) naturalist, spent most of his life collecting and studying natural history on the small island of Mauritius off the east coast of Madagascar. He documented his discoveries in Madagascar and tropical Africa in his 1837 book Hortus Mauritianus.

Professor Davidson, my History of Geography instructor, changed the heading for the 1700s and 1800s part of her course from “Era of Exploration” to the “Era of Exploitation.” In our supposedly enlightened age we see the injustices heaped upon land after land as western explorers “discovered” them and brought them out of isolation into the glare of the modern world.

The foment unleashed upon these newly discovered lands – even though their professed scientific mission was to look, see, catalog and understand – quickly lead to rapid exploitation of native populations and the wholesale plunder of natural resources. These takedowns of indigenous populations were often done under the guise of “saving” the population with the “true” religion or improving their standard of living by trading for new and improved solutions to age old problems. But greed was the principle motivator: to take as much as can be gotten and give back as little as possible to make as many shekels as possible. Bojer’s discovery of S. cylindrica had no direct effect on the parade of events that unfolded in tropical Africa, but it was but one more butterfly flapping about to forge the changes that followed.

The cylindrical leafed snakeplant is an easy-to-grow houseplant that can be grown in high, moderate or low light environments inside the home. It is a fleshy plant, so to keep it from toppling over, incorporate some sand or garden loam into the potting mix. Plants can tolerate considerable drought but will be quickly killed if allowed to sit in water. Crowded and rootbound plants often make more handsome specimens than plants that are frequently divided.