Plant of the Week: Rhizomes

Most of us think of plants only in terms of what we look at when we see them. We don’t consider the part we can’t see growing beneath the ground. While roots are the primary underground feature of plants, all sorts of modifications below ground exist in the plant kingdom to aid in avoiding stressful conditions or increasing a plants’ spread. Let us consider one of these adaptations, the rhizome. 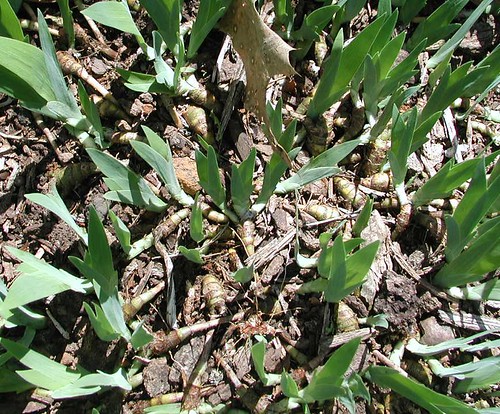 Rhizomes are stems that grow horizontally instead of upright as seen in most plants. Usually these horizontal stems are below ground, but some species of iris produce them at the soil surface so they are easy to see. Sansevieria, the so-called snakeplant, earns its common name from the snake-like rhizomes that crowd around the plant when found in the wild.

True roots do not have nodes, but rhizomes, being stem tissue, have nodes and internodes and a dominant, terminal growing bud. Along this stem, roots grow from the bottom part of the stem while shoots may grow from the upper portion of the node. Just as in above ground stems, rhizomatous plants vary in their tendency to branch. Iris, for example, are very systematic about it. Each spring the terminal bud of the rhizome sends up a set of leaves and a flowering stem, while at the same time at the base of that rhizome, two axillary branches form and the daughter rhizomes develop which will flower the following spring.

The variegated Solomon’s seal (Polygonatum odoratum) is a rhizomatous plant that produces a mass of finger-sized rhizomes a couple inches beneath the soil surface. I dug and divided an established bed of these plants one fall with the aim of propagating them. I cut the rhizomes into 3-inch-long sections, trying to leave a terminal growing point on each piece. These I potted in flower pots and they all produced a healthy flowering stem the next spring.

But, after the “good” rhizome pieces were planted, I had a number of “blind” rhizome pieces with no signs of active bud growth. I planted them in pots, and the following year nothing emerged. The spring following that, these “blind” rhizomes all produced shoots and grew normally. Trilliums, a notoriously difficult to transplant wildflower, also have rhizomes. It is not uncommon for them to skip a year of growth after being transplanted while new axillary buds form from the short rhizome.

But a lot of plants with rhizomes have a thuggish nature. Bamboo, blackberries, bermudagrass, and trumpet creeper all spread aggressively in garden sites if the soil is good and there is lots of light. Others, such as nandina, many clump forming grasses, and a whole host of garden perennials, have more modest rhizome growth and are more or less confined to a small spot in the garden.

Some plants, such as my much loved Epimediums, have species that have very short rhizome growth and never spread while others spread freely and colonize an increasingly large area, eventually forming colonies several feet across. I’ve grown more than 60 species and selections of these plants and much prefer the aggressive growers such as the old ‘Frohnleiten’ or E. wushanense to the clump formers such as ‘Bandit’ that just sit there and form small mounds.