Walking by a small flowering cherry tree on the U of A campus during the first week of February, I noticed its flower buds were almost fully extended and only weeks from being in full bloom. The tree was Okame cherry (Prunus x incam “Okame”), one of the earliest flowering of the Japanese cherries. 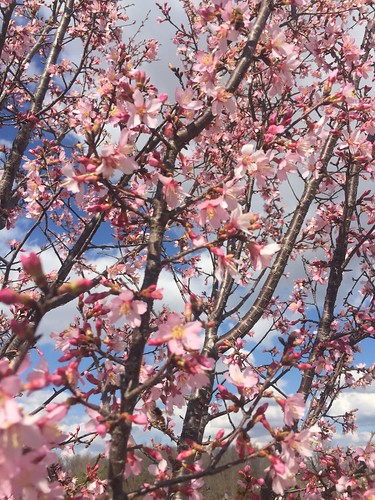 At least 430 species of cherries are native to the northern temperate zone of Europe, Asia and North America, where they grow as small trees or shrubs. Important fruit trees such as peaches, apricots, almonds and cherries are part of the group but a number of ornamental species are also found here, including the Japanese flowering cherries.

Okame is a small, somewhat twiggy, erect growing deciduous tree with a rounded crown that reaches 25 feet in height with a spread of less than 20 feet. As the trees age, the trunk and larger limbs take on a polished reddish-brown look with prominent horizontal lenticels. Its bark is attractive in the winter landscape. In the fall it has good bronze-orange fall color.

The flowers are a deep carmine pink and produced on pendant pedicels in a mass of somewhat downward facing flowers crowding the stems. The five-petaled, slightly fragrant flowers have a deep red calyx and appear in late winter. Here in Fayetteville, during the past four years, it has an average bloom date of the last week of February, with a range from mid-February through the first week of March. Blooming that early, fruit never form.

Okame is a hybrid between Prunus campanulate, the Taiwan flowering cherry and P. incisia, the Japanese Fuji cherry. From the Taiwanese species it inherits its pink flowers, early blooming characteristics, fast growth, and heat tolerance. From its Japanese parent it inherits its cold hardiness. The initial cross was made in 1930 in the English estate garden of Captain Collingworth “Cherry” Ingram (1880 – 1981). Okame was officially named in 1947 and is the most common of Ingram’s several introductions.

Ingram was an interesting character who developed a deep affection for Japanese cherries after seeing them in bloom in their homeland in the early years of the 20th century and then, after surviving World War I in France while working with the Royal Flying Corps adjusting compass alignment, took them up in earnest in 1919. He went on to write a book on the Japanese cherries in 1948 which served as a primary reference for many years. A detailed biography can be found on the web by searching “Cherry Ingram – Naoko Abe”.

Okame flowering cherry was awarded the Styer award (now the Gold Medal of the Pennsylvania Horticultural Society) in 1988, back when recognizing plants of merit was a new thing here in the colonies. This gave this fine cherry the nudge it needed to be picked up by nurserymen and today it is recognized as one of the finest flowering ornamental cherries for USDA growing zones 6 through 8, which includes all of Arkansas.

Like all flowering cherries, this plant should be located in full sun in a fertile, well drained soil. South or west facing sites should probably be avoided because it blooms early enough as it is. Being a cherry, it is susceptible to any number of potential ailments, so don’t be surprised if it succumbs to some ailment in 25 or 30 years. But what a glorious life it will have.