A common lament heard during the winter season is that gardens look so drab.  I object to that glass half full way of thinking because to me, wintertime is the season for the evergreens to shine.  I especially like the pines because their green, billowy nature smooths the sometimes-sharp edges of the wintertime scene.  The deep green needles of Japanese black pine (Pinus thunbergii) is one of my favorites, especially where a modest sized specimen is needed. 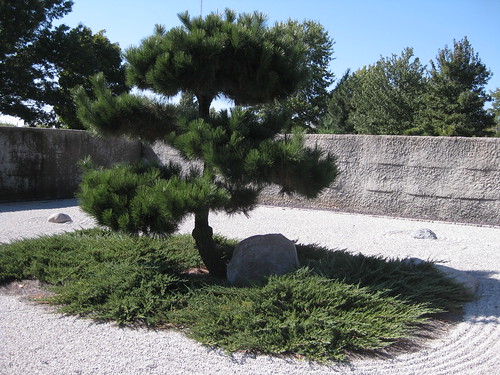 About 125 species of pines, all native to the northern hemisphere, have been described.  They are about evenly divided between Eurasia and North America but absent from the Southern Hemisphere, indicating they emerged on the scene after the breakup of Pangea into its component parts, probably about 150 million years ago.  The Japanese black pine is native to Japan and Korea.

In its native range Pinus thunbergii is a 100-foot-tall, umbrella shaped pine with thick, platy gray-black bark.  But, it also occurs in a number of contorted forms where it has an asymmetrical, often twisted and distorted character, making it well suited for ornamental plantings.  These forms have been collected and propagated in Japan where more than 40 clones are listed.  The selected sorts are usually smaller, seldom exceeding 30 feet in height.

Japanese black pine is a two-needle pine with deep green needles four to five inches long that are held in a half inch long silvery band at the base.  The needles persist four to five years.  The candle shaped terminal buds are to two centimeters long, silvery white in color and a distinctive identifying characteristic of the species.  The cones are two to three inches long, ovoid in shape and require two years to mature.

The contorted form of even young trees makes this pine popular where a specimen is needed in the landscape.  With a little pruning, these natural tendencies can be enhanced.  In the accompanying photo, taken in the Japanese garden of the Springfield, Missouri Botanical Garden, the specimen is undergoing “niwaki” training.

Niwaki is a term that translates as “sculpted tree”, but the word is also used as a pruning style that is used on most plants grown in a traditional Japanese garden.  In Japanese gardens, symbolism is everything.  The raked gravel is a representation of the sea, the stones represent the mountinous islands and the trailing juniper the greenery of the main island.  The lone Japanese black pine is a stand in for the forest.

This pine is in the nursery trade because it grows fast, retains its lower branches while young and has a handsome form.  Unfortunately, it is not a long-lived tree in most American gardens, seldom making it more than 20 years.  As trees reach maturity (begin to set cones), Diplodia leaf blight often begins to defoliate the lower branches, creating a bedraggled look.  Sometimes, pinewood nematode – a native nematode that has killed many introduced pines over the past decades – can wipe out an entire planting in a single growing season.  Unfortunately, this pest was accidentally introduced to Japan and is threatening the pine in its native range.

The relatively short-lived nature of the Japanese black pine is no reason to exclude it from the landscape.  It makes a fine, small specimen.  Clones such as ‘Thunderhead’, with its irregular, billowy branches, or ‘Majestic Beauty’, with its dense, compact deep green form, make good additions to any garden.  After a couple decades most gardens can benefit from a workover, so changing out a specimen or two should not be a problem.