The green beans of modern commerce are surprisingly similar to those grown by native tribes before the arrival of Columbus. Similar, that is, if we don’t consider the fact that they are now “bush” beans with concentrated flowering and ripening and are grown in straight rows to aide in mechanical harvesting, instead of the random grid planting of old. The pole or runner bean (varieties of Phaseolus vulgaris) was one of the “three sisters” that were part of the nutritional mainstay for tribes living as far south as Chile in South America to the cold reaches of eastern Canada. 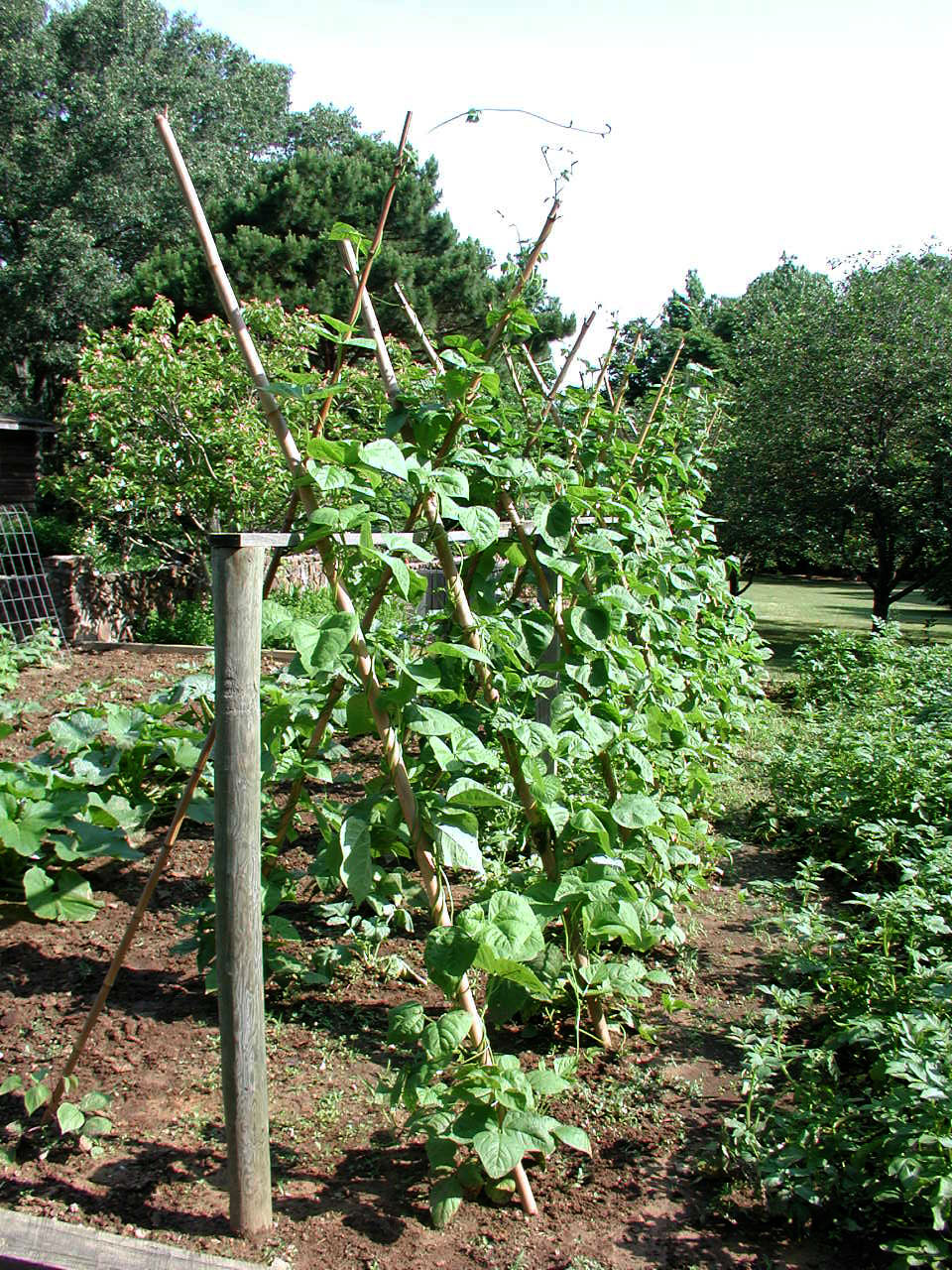 THREE SISTERS — Pole beans are a staple of the home garden and one of the “three sisters” grown by native tribes in pre-Columbian days from Chile to the St. Laurence seaway in Canada. (Image courtesy Gerald Klingaman.)

The pole bean is a New World annual vine of the legume family that probably originated in Central America. It has been cultivated for at least 6,500 years and is believed to be the last of the trio of plants to be domesticated. Squash was probably first, beginning between 8,000 and 10,000 years ago, with corn domestication somewhere between the other two sisters.

Pole beans are twining plants with rounded, three-lobed compound leaves borne alternately on the stem. Vines can grow 12-15 feet tall but are usually trained to trellises low enough to facilitate easy harvest of the beans. The bilobed flowers are produced throughout the period of growth of the vine and are uniquely designed for bee pollination. The rounded bean pod is edible, green in color, stringless and to 6 inches or more in length. Kentucky Wonder, and old clone said to be around since the Civil War, is one of the most common of the pole beans.

The practice of planting corn, beans and squash together as companion plants in a scattered hill system seems to have originated in Mesoamerica more than 6,000 years ago. Reports of first contact by Europeans describe corn with climbing beans growing on them; although specific mention of squash being grown as part of the mix is not as universal, it is mentioned. Columbus first reported beans in 1492, Cartier in 1535 at the mouth of the St. Lawrence seaway, DeSoto in 1539 in Florida (and later Arkansas), followed by the Jamestown colonists and Pilgrims in the early 17th century.

The beans being grown were of various sizes, shapes and colors, with each tribe growing a dozen or more specific types. While a few were probably grown for their edible pods, most were for dry bean production that could be stored. Several explorers mentioned tribes having abundant supplies of corn and beans in their storehouses. A diet heavy on beans, corn, and squash contains complex carbohydrates, essential fatty acids and all nine essential amino acids needed for good health.

A common planting method used in the Mississippi valley by native tribes was to form an earthen mound about six inches high and one to two feet across. Five to seven corn kernels would be spaced across the mound in mid spring. When the corn plants were growing well and less than a foot high, beans and squash seeds would be interplanted on the mound. The beans would use the growing corn stalks for support while the squash vines would fill in the space between the hills, acting as a living mulch and shading out many summertime weeds. Beans, being legumes, would provide nitrogen to help keep the corn growing.

U.P. Hedrick, in his 1919 Sturtevant’s Notes on Edible Plants, quoting from the earlier explorers who encountered native agricultural practices, does not use the term “three sisters.” Credit for the term seems to be given to an Iroquois folk tale that describes the affection the three sister plants have for each other. I suspect that the term came into general use during the early 20th century when recording Native American folklore became common.

Runner beans are good garden plants because they grow throughout much of the growing season providing fresh pods over an extended period. They should have good garden soil in full sun. A bamboo teepee, woven wire fence trellis or suspended cords can be used to provide good support for the vines. Old heirloom varieties such as Kentucky Wonder or Blue Lake Pole Bean remain popular with gardeners though there are many new and improved selections available. Beans reach maturity after about 65 days.