The history of plant introductions into cultivations is a bewildering mess of conflicting and contradictory information. When a new potentially useful plant is identified, it is dispersed by the person who first noticed its potential to others for trial. These gardeners or nurserymen then may pass the plant on to their circle of friends. Somewhere along this line of distribution, a written record will begin to emerge, often from people two or three times removed from the original source who may not know the full history of the plant in question. Sunshine lily (Ornithogalum dubium) is a new plant in the bulb trade that illustrates this phenomenon. 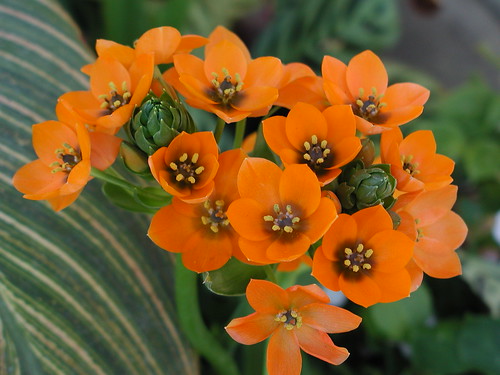 Ornithogalum dubium is one of about 150 species of bulbous perennials scattered from the Mediterranean region to South Africa, the home of this species. Though the taxonomy of these bulbs is a bit murky, they are currently considered members of the asparagus family.

This frost tender species grows about a foot tall with fleshy bulbs and leaves. The leaves emerge with the return of fall rains and go dormant with the arrival of hot weather.

Flowering is in the late spring. Scapes grow to a foot tall with up to 25 1-2-inch-wide, six-petaled flowers marked with a greenish black blotch at the base of the orange to yellow flowers. If the original flowering scape is cut back when all the blooms have opened, a second scape may force later. The plants remain in bloom for around a month.

I first became acquainted with Sunshine Lily as a flowering pot plant I picked up at a Wal-Mart garden center in the spring of 2005. Unbeknownst to me, the plant I had purchased was really O. “Chesapeake Blaze,” a sterile tetraploid Ornithogalum hybrid developed by U.S. Department of Agriculture scientists R.J. Griesbach and F. Meyer from work they had begun in 1988. In 1999 they introduced three new bulbs, licensed for tissue culture propagation, with a Dutch bulb growers association.

Their breeding work followed some started in the 1960’s that was unsuccessful because crosses between the three species used in creating the hybrids did not produce viable seeds. They used O. thyrsoides, mostly grown as a cut flower with as many as 75 white blooms per scape, O. multifolium for its compact growth habit and O. dubium for its range of flower color.

What these scientists did that made their breeding program so successful was to use a technique called embryo rescue. While these wide crosses would initially create a viable embryo, the seed would not reach maturity before aborting. They found that if they removed the developing embryo 10-14 days after pollination and put the excised embryo on a sterile nutritive media, they could develop a viable seed.

I see what I believe to be “Chesapeake Blaze” offered for sale but it is listed as if it were the species O. dubium, not the hybrid. They are primarily promoted as tender bulbs for forcing.  Three bulbs per 6-inch pot is the usual recommendation. The bulbs should be given a pretreatment of 63⁰F for four weeks before potting in any quality potting mix. Then bulbs should be forced in a sunny situation with a daytime temperature around 75⁰F. Keep the plants watered during the forcing period, but once the foliage has begun to die after flowering, withhold watering until they are forced again in the fall. Flowering usually begins 13 weeks after forcing begins.

O. dubium and its hybrids are hardy in zone 9 and south but are best suited for regions with a dry summer. The hybrids should not reseed like its pesky cousin, the Star of Bethlehem, which is a persistent lawn weed across much of the South.