Plants come in all shapes and sizes, and we plant geeks revel in this diversity. But to the uninitiated, all this greenery can sometimes be considered boring. While this is hardly the case, plants seldom capture the imagination in the same way that man-eating sharks or your average Tyrannosaurus does. But some plants are killers, too. If more knew of the pitcher plants (Nepenthes) and their murderous ways, their image of being boring might be discredited. 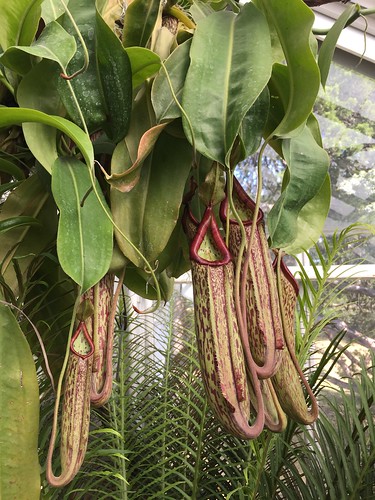 Pitcher plants belong to their own family with more than 160 species described, most of which are native to the tropical Malayan Archipelago with their center of distribution in the mysterious lands of Borneo and Sumatra. They are shallow rooted tropical vines that can sprawl across the jungle floor or climb to the tree tops. Some species are lowland inhabitants prospering in uniformly warm, humid conditions while others are found only the mountainous regions of the tropics where the days are warm and bright but the nights considerably cooler.

It is the leaves of the pitcher plant that make them unique. The main part of the leaf blade is a glossy green, lance shaped affair 6-8 inches long. But the leaf doesn’t stop with just providing a green platform for photosynthesis. As the leaf blade reaches full size, the midrib of the leaf continues to grow, extending out about the same length as the leaf blade. At the tip of this slender extension, called a tendril, a bulbous swelling develops.

This swelling eventually grows into a hollow tube a couple inches across and 4-8 inches long. The tube grows vertically as it develops with the distant end of the tendril forming into a lid that covers the tube at night to exclude rainfall. The tube colors and markings are distinct amongst the species, often being blotched with maroon coloration.

The upper lip of the pitcher cup is often colorful and reminiscent of a flower, sometimes even producing nectar or sweet fragrance to attract unwary insects.  Pitcher plants are called pitfall carnivorous plants because prey, mostly small insects but occasional a clumsy lizard or even tiny rodent, will lose their footing and fall into the pitcher trap. The lid does not close when this happens, but the prey cannot escape because the inside sidewalls of the trap are slippery and provide no traction.

Further complicating escape, even for flying insects such as flies, is a sticky digestive fluid that ensnares the victim and prevents their escape. The fluid, even when diluted with a lot of rainwater, retains its viscous properties. The plant then digests the prey, recapturing the nitrogen and phosphorous from their bodies in this intriguing example of the intricacies of the web of life.

Linnaeus named these plants, which were first collected by traders in the late 17th century, Nepenthes after a passage in Homer’s Odyssey. In the passage, an Egyptian queen by the name of Nepenthe administered a drug that caused all sorrow and grief to vanish. To Linnaeus’ way of thinking, to discover such a wondrous plant would vanquish any amount of hardship required to gather it in from the jungle.

Nepenthes became popular in European conservatories during the latter half of the 19th century when the rich still had conservatories and it was considered fashionable to collect tropical plants, especially orchids and carnivorous plants. But by the time World War II arrived, times and tastes changed and Nepenthes collecting almost disappeared. In the 1960’s, a Japanese botanist focused his interests on the genus and since that time, minor interest has revived in the group of plants.

Today most of the plants available in the nursery trade are hybrids produced by tissue culture or cuttings. Though not common, they can be found on the Internet. To grow them successfully year round requires a greenhouse where the temperature and humidity can be maintained to accommodate the needs of the species. For those with a callus heart, a hanging basket grown plant can be acquired in the spring and placed outdoors in our hot, humid summers and enjoyed through the season. It can maybe be kept alive over winter indoors on a window sill, but if not it may make an interesting summertime specimen to inspire the grandchildren.