That all things are connected through the web of time and space is encapsulated in the “six degrees of separation” idea. Plants and political intrigue are not often brought together, but in the strange mind of despots, even botany can have its dangers. Russian Cypress (Microbiota decussate), also known by the more accurate moniker of Siberian Arborvitae, is a fine plant with an interesting backstory. 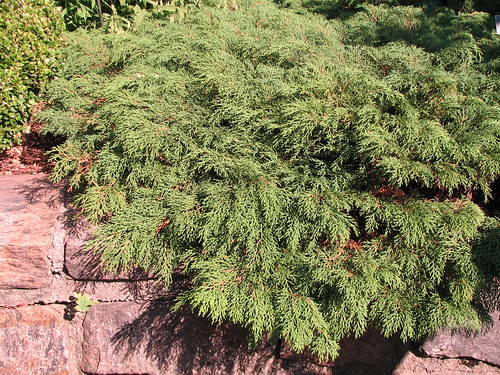 Microbiota is a monotypic (only one species) member of the cypress family native to the mountainous regions near Vladivostok in southeastern Siberia and endemic in the Sikhote-Alin range. It mostly grows in sub-alpine situations near the timber line, with an average elevation of about 3,700 feet above sea level but on eastern slopes can be found as low as 1,000 feet.

It is a low-growing, broadly spreading evergreen conifer. Plants grow about a foot tall and spread far and wide as long as conditions are to their liking. References often give their spread as 10 feet, but such limits are meaningless for a conifer with the potential of living to be 250 years old. However, pruning can be used to keep the plant to about any size.

Superficially, Russian cypress resembles a juniper. Microbiota has feathery, bright green branches with nodding tips while most junipers have ascending tips and stiffer, sharper needles.  In fact, a botanist named I.K. Shishkin, who first collected it in in 1921, tentatively identified it as a juniper. But in 1923 the eminent Russian botanist V. L. Komarov, who spent his long career studying the flora of Manchuria and East Asia, recognized it as unique and assigned it the name Microbiota, which translates as “little arborvitae.”

My connection with this region comes from a book, Dersu the Trapper, by Russian Army officer and explorer V. K. Arseniev (1872–1930). Arseniev recounts his adventures exploring the taiga (boreal forest) north of Vladivostok between 1902 and 1907 with Dersu Uzata, the last of a group of disappearing woodsmen of the Goldi tribe, as his guide. This was when Siberian tigers still roamed the woodlands and many of the plants from the region were still unknown to the outside world.

Stalin absorbed the East Asian Republic into the U.S.S.R in 1922 but Arseniev refused to return to Moscow.   After his death his widow was put on trial and summarily executed for being a spy and leading a group of traitors supposedly put in place by her late husband.  By 1956 Arseniev’s reputation had been resurrected.  A Russian and later Japanese film was made of his book with the 1975 Japanese film winning the Academy Award for the Best Foreign Film.

Microbiota, though known and described, got lost in the turmoil of the Stalin era. Botanist Komarov, a well-placed and politically safe botanist, won the Stalin medal twice for his work showing “the superiority of U.S.S.R. science.” The first report of it being grown outside the Soviet Union was at an arboretum in Holland in 1968. I first saw it at the National Arboretum in 1972, after which time it was quickly dispersed through the nursery trade.

Russian cypress is hardy from zones 3-7, but because of its origins in the far north, it does better at the colder end of the range than in the hotter, more humid areas. I have had no problems with it in Fayetteville, but although the plant is touted as drought tolerant, it is not tolerant of high heat and extreme drought at the same time. It has more shade tolerance than junipers, and in the southern reaches, is best grown with afternoon shade. It is adaptable to a wide range of soil conditions but is best in well drained, moderately moist locations.

The advantage of Microbiota as an evergreen groundcover is its resistance to Phomopsis tip blight, a common ailment of Junipers. Some find the orange-purple wintertime appearance of the foliage off-putting, while others feel it adds color to the winter landscape.

For more information about horticulture or to see other Plant of the Week columns, visit www.uaex.uada.edu, or contact your county extension agent.  The Cooperative Extension Service is part of the U of A Division of Agriculture.