Plant of the Week: Living Fences

Should you have somehow missed it, fences and walls are much in the news of late. As a farm boy with a somewhat bizarre interest in Chinese history, I have opinions on the merits of walls and fences on keeping things in and out. As far as I know, the use of a living fence to guard our southern border has not been suggested, but living fences have a long history of service. 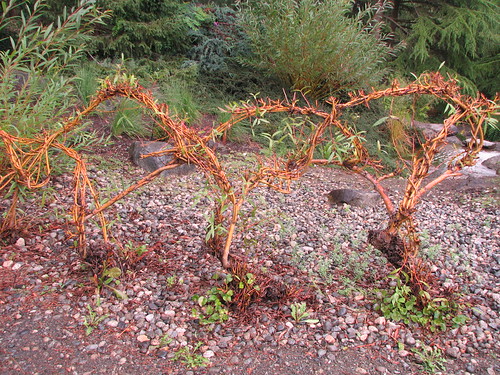 Fencing to keep livestock in or out has been a part of agriculture since the very beginning. Some of the most picturesque living fences in the world must be the sometimes centuries old English hedgerows. Typically started as close-spaced hawthorns to keep the cows in (or out), they have been infused with an assortment of other woody species over the generations to create their own ecosystem that shelters wildlife of all stripes. The English Hedgerow Trust is one of the organizations that protects these picturesque and environmentally important features.

In the United States we had a brief flirtation with hedging. In my library I have a copy of John Warder’s 1858 treatise entitled Hedges and Evergreens – A Complete Manual … (of) All Plants Suitable for American Hedging. The author is especially fond of Osage orange and reports an 1854 resolution of the State Agricultural Society of Ohio that goes: “Resolved, That we recommend to the farmers of Ohio, the Osage Orange as a most suitable plant for hedging; superior in all respects to every other plant which has yet been introduced into Ohio for economical and enduring fences.” But the 1867 patent of barbed wire saw the end of the promotion of hedge row plantings in the Midwest.

In Africa, various species of candelabra cacti (Euphorbia sp.) have, and still are, used to create impenetrable barriers for cattle and even goats. Cuttings of these gruesome, stout-thorned species are planted side by side and present a formidable barrier.

Hedging also has its political side. Since Teddy Roosevelt rode his Rough Riders up the hill in Cuba in 1898, ultimately winning the United States a “perpetual lease” on the 45 square mile piece of southeastern Cuban real estate called Guantanamo Bay, there has been tension over the deal. These tensions boiled over when the Bay of Pigs fiasco occurred in the spring of 1961. Though the invasion was several hundreds of miles away, Cubans on the outs with the Communist regime flooded into the Guantanamo Bay base seeking asylum.

The U.S. military had maintained a 17-mile-long concertina-wire topped fence around the base, but Fidel Castro ordered a living wall of cacti be planted in the fall of 1961. According to the propagandist view, it was to keep American spies out of Cuban territory. This was dubbed the “Cactus Curtain” and a second Cuban fence erected outside the planting. In 1983, land mines were added as a finishing touch.

Walls, fences or hedges all deter movement, but each has a fatal flaw. They are only temporarily effective because nature – both the Darwinian and the human kind – has a way of circumventing all barriers.

In the garden, living fences can take the form of actual hand-woven branches of some fast-growing species such as willow, or they may be hedges of any number of evergreen plants or they can be informal shrub borders that are a naturalistic blend of a number of different species. The desired effect is quickly lost if the plants are not carefully managed by frequent and sometimes severe pruning.

For more information about horticulture or to see other Plant of the Week columns, visit Extension’s Website, www.uaex.uada.edu, or contact your county extension agent.  The Cooperative Extension Service is part of the U of A System Division of Agriculture.