Timidity has its place, but if you have a lot of ground to cover and want plants that can be seen from a distance, consider the perennial sunflowers. Giant sunflower (Helianthus giganteus) is one of half a dozen fall blooming perennial sunflowers that can have an oversized effect on the garden when they do their thing. 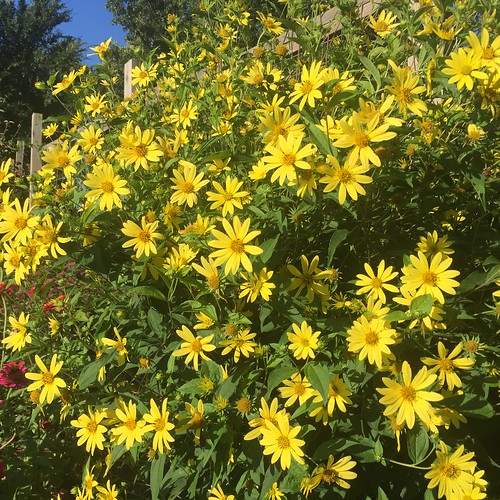 Giant sunflower is one of seventy species of sunflowers that belong to the daisy family, all but three of which are native to North America. The name sunflower is usually associated with the large flowered seed producing annual that is grown for its edible kernels, but in fact, most species are perennials. The Latin name Helianthus is from Greek and joins helios (sun) and anthos (flower), and is a reference to the sun-like appearance of the annual sunflower.

Giant sunflower is native to the Eastern states and Canada, but does not cross the Mississippi River and make it into Arkansas. About 15 species of sunflower are native in Arkansas with half of these appearing in more than a third of Arkansas counties.

This giant sunflower is well named, being an 8-to-10-foot-tall, rhizomatous perennial that spreads rapidly, forming bold clumps 4-6 feet across in just a few years. It has willow shaped leaves 4-6 inches long that remain relatively unblemished during the growing season. The stems are erect and unbranched as they emerge from the rhizomes until the summer, when they branch terminally as flower buds begin forming.

The yellow flowers appear in August and September and are 2-3 inches across and produced in abundance at the ends of the numerous branches. A single row of ray flowers surrounds the inch-wide button of yellow-brown disc flowers. “Shelia’s Sunshine,” a 1994 introduction of North Carolina’s Niche Gardens and shown in the accompanying photo, has pastel yellow ray florets. Plants bloom for four to six weeks, beginning in late August.

Several native perennial sunflowers can make a bold statement in the garden, but they require room and sunshine. Managing this size in the garden can be a challenge. Most of these species, including giant sunflower, are creatures of the forest glade or along open areas along streams.

In these locations they still get at least six hours of sunshine a day, but wind may be blocked by surrounding vegetation. When they bloom atop such tall stems, the plants may topple over, creating a happy jumble when they flower but driving neat-nick gardeners crazy. Several strategies for managing the laws of nature and physics present themselves.

Staking is always an option, but first, don’t encourage rapid growth by planting in rich sites or by fertilizing. Try to locate the plants in a sunny, wind-whipped area where the exposed conditions will produce stouter stems.

Pruning is probably the easiest approach to maintaining size. I use what I think of as the “Arkansas DOT” method of pruning. Just like the people who maintain the highways by brush hogging the roadsides, you can keep size down by pruning the plants to the ground. In a planting I maintain that will eventually become a meadow garden, I mowed the plants to the ground on June 1. The giant sunflowers are now blooming, but instead of being 10 feet tall, they are five. Still tall, but a bit more gardenesque in their appearance.