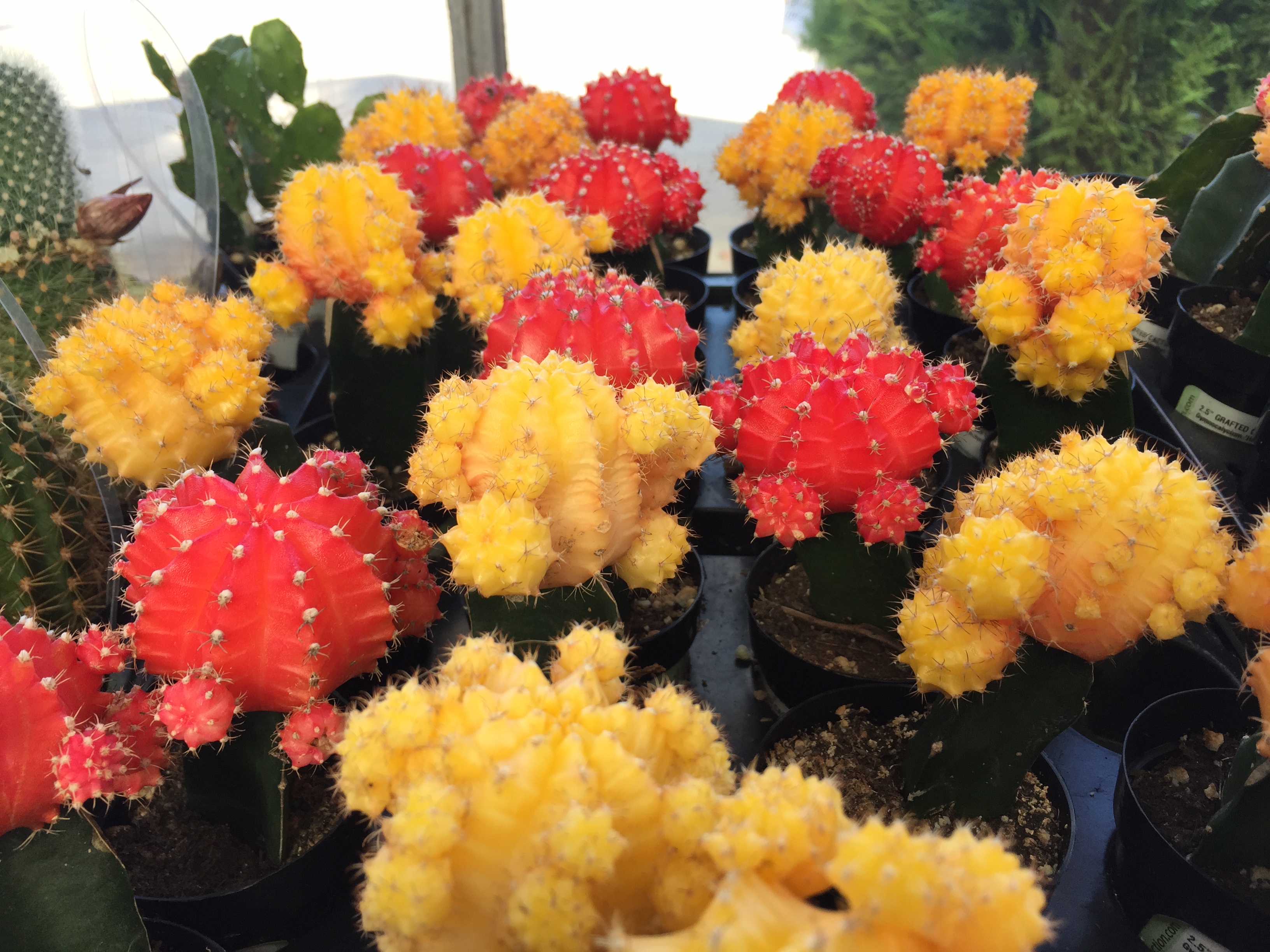 Taste is a subjective thing, so what some consider gaudy and uncouth, others adore.  I must admit I consider the grafted moon, neon or Hibotan cacti (Gymnocalycium mihanovichii var. friedrichii 'Hibotan') a bit off-putting, but as plants they have an interesting story to tell.

What is a Moon Cactus?

The Gymnocalycium cacti consist of about 80 species of cacti from south central South America.  They are all modest-sized ball cacti with showy flowers, but none are especially common except amongst cactus collectors.  The only members of this group that is really common are the moon or Hibotan cacti which are the neon colored yellow, orange, red, pink or even purple balls we see for sale in the garden departments of mass market retailers.

These grafted cacti are usually small and seldom seen in pots larger than 4 inches in diameter.  The grafted tops are usually as wide as 4 inches across, with individual balls seldom larger than a golf ball.  They branch freely and have numerous offsets.  Because they lack chlorophyll they can survive only when grafted onto a green cactus rootstock, usually the adaptable tropical Hylocerus undatus.  Hibotan cacti do not seem to flower.

The name “moon” cactus is sometimes used as a common name for the group, but in truth this name should be only applied to the yellow and orange clones.  Neon cacti is sometimes used as a common name and seems to be a more inclusive.  The cultivar name ‘Hibotan’ was applied to the first orange-red introduction but it is now often referred to as “Red Cap” or ruby cactus.  At least 16 color variants of this type have been described.

What is the origin of the Moon Cactus?

The development of these horticultural curiosities dates to Japan during the war years.  While there is not complete agreement about the origins of the achlorophyllous clones, the person with the most convincing story is one Eiji Watanabe, a commercial nurseryman.  He imported 300 seeds of Gymnocalycium mihanovichii var. friedrichii from a German source in 1937.  He grew these until they flowered and then collected seed from them and grew out 10,000 seedlings during the 1940 growing season.

Two of these were mutants with slightly reddish bodies.  These he grafted and continued to propagate by selecting forms with better colors.  ‘Hibotan-nishiki’ was a chimera plant that contained some chlorophyll and could be grown on its own roots and appears to have been used as a parent to produce some of the other color variants seen today. ‘Hibotan’ was introduced in 1948.  Some critics accuse Watanabe of being only a good story teller who purchased the original plants from cacti specialists and began the process of creating the novelty market for them.

The neon cacti made their way into the European and then American markets in the 1960’s but were never a big hit among cactus collectors.  They began to appear in mass market outlets in the 1980’s and continue to be sold there.  Today 70% of the world production of these grafted cacti, with a wholesale value of $4,000,000 in 2011, is produced in South Korea.

How do I care for a Moon Cactus?

Grafted cacti are easy to grow thanks to the rootstock.  Hylocerus undatus is a triangular shaped, tropical, sprawling epiphytic cactus that is tolerant of extreme drought or survives in moist soil.  So with even minimal attention to watering the grafted plant can be expected to survive.  Because the top of the plant can overgrow the green, grafted base most neon cacti only survive a couple years unless regrafted onto a new rootstock.  While these interesting and bizarre plants are cacti, they typically grow in the shade of other desert plants.  Locate them in an area with bright light but not full sun or sunburn damage may result.