With thousands of plant photos to try to keep up with, I sometimes resort to shortcuts to aid my faltering memory. The genus Eupatorium was a catch-all genus in the daisy family that contained a number of Joe Pye like plants that has been blown up by new naming schemes. So I can find these plant photos, I file them under their old names such as Eupatorium rugosum, the White Snakeroot, and then tack on their new name almost as an afterthought. 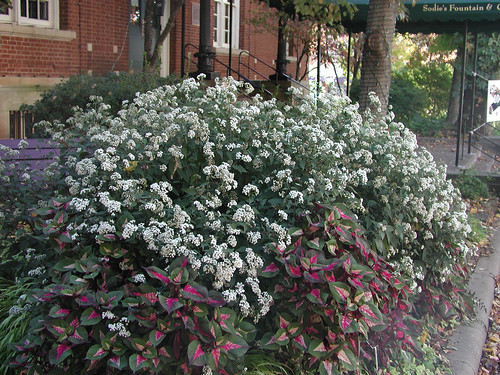 White snakeroot’s new name is Ageratina altissima and was assigned in 1970, when the aster family was rearranged by two botanists who specialized in the family. About 250 mostly New World species of Ageratina have been described, with 14 of these described in the new Flora of North America. This species is native from Texas to the Dakotas and all points east.

White snakeroot is an herbaceous perennial that reaches around 2 feet tall with smooth tan, hairless stems that arise from a fibrous-rooted crown in late spring. The opposite leaves are deltoid shaped (think ace of spades), with coarsely serrated margins and a long petiole. The hairless leaves are rough textured and to 4 inches long and two inches wide. “Chocolate,” a vegetatively propagated selection made by the Mt. Cuba Wildflower Center in Delaware, has brown-hued leaves.

In late summer and early fall the stem begins branching to form a terminal flat-topped corymb from 3-6 inches across. The white, slightly fragrant, compound flower head is about half an inch across and composed of 5-lobed, tubular disk flowers. There are no ray florets as seen in sunflower, but the large number of congested heads put on an effective display.

This native plant has an important backstory. Frontier communities often were afflicted with a malady known as milk sickness. It came on in midsummer and dissipated with the first hard freeze and was especially serious during periods of drought. It afflicted both humans and cattle, starting with symptoms of trembling, then general weakness, lack of muscle coordination, and in about a third of the time, death. In humans, vomiting and constipation were additional symptoms.

Anna Pierce Hobbs Bixby moved to southern Illinois with her family in 1824 but later returned to Philadelphia where she studied medicine. Returning to her family home in 1828, she treated patients displaying symptoms of milk fever. In the 1830s, Dr. Anna became convinced that the ailment afflicting sucking calves and humans was related and concluded that it must be from the milk of cows that frontier settlers turned into butter. Abraham Lincoln’s mother, who died in 1818, is thought to have been a victim of this ailment. In her search for a causal agent, she happened upon a Seminole herbal healer who showed her white snakeroot, a plant that cattle would eat but horses, sheep, and deer shunned.

She tested this theory by feeding a calf on foliage of white snakeroot and was able to reproduce the symptoms. Locally she promoted the eradication of the weed from woodland plots where many of the milk cows foraged during the summer. Because of her limited contact with the medical profession, the causal relationship between white snakeroot and milk fever was not officially nailed down in the medical literature until 1928.

White snakeroot is a plant that typically grows in semi-shaded woodlands where it may be locally dominant in the understory vegetation late in the growing season. Its ability to grow and thrive in this understory habitat makes it well suited for perennial borders where its white autumnal flowers blend well with the yellows and blues typically seen in the fall garden. As few of us maintain a milk cow in the back yard anymore, milk fever should not be a problem.