I recently returned from the annual fieldtrip of the American Penstemon Society into the wilds around Vernal, Utah. Though I saw a number of nice penstemons, it was the of Mormon tea that caught my attention. Mormon tea, Ephedra viridis, is one of sixteen species of Ephedra that grow in the deserts of the southwestern states and has an interesting story to tell. 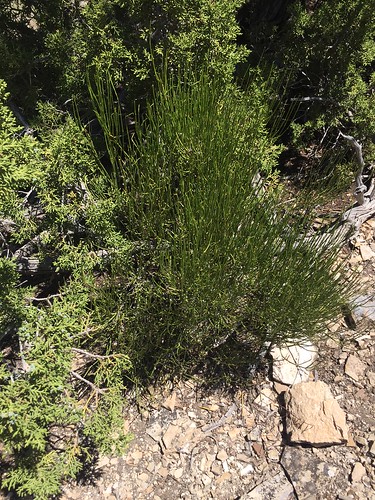 The Ephedras are amongst the most ancient land plants, dating back more than 300 million years. Forty species are described with distribution along the entire length of the west coast of South America, our southwestern states and adjacent areas of Mexico, southern Europe, north Africa, a wide swath of Central Asia and the Middle East. This wide distribution pattern speaks of their antiquity and can most easily be explained by the breakup of the supercontinent Pangea about 225 million years ago.

Ephedra is also interesting because it is one of the gymnosperms, plants that produce seeds naked (not enclosed inside an ovary) on a scale-like cone. Better known gymnosperms include ginkgo, cycads and all the conifers such as junipers, pines and their ilk.

Ephedras are dioecious with plants being either male or female. In late spring, male plants produce three-quarter-inch yellow clusters of small flowers up and down the stem that are reasonably attractive. Female plants produce pointed, peanut sized “cones” that protect the seeds. In their native haunts, flowering and seed production is a hit or miss proposition and does not occur every year.

Most people know of Ephedra, not as plants from the garden, but from the herbal remedies produced by the Asian E. sinica which gained wide acclaim as a diet pill and general stimulant during the close of the 20th century. Its amphetamine-like properties – primarily related to the chemical alkaloid ephedrine – lead to its used as performance enhancing drug in sporting events and weight loss concoctions. In 2006, the U.S. Food and Drug Administration upheld the ban on sale of ephedrine containing supplements, though Ephedra supplements without the most potent compound remain legal.

Mormon tea concoctions, though a relatively strong stimulant, is not a prohibited drink in the Mormon religion, though coffee, tea and caffeine containing soft drinks are. It’s first mention in written reports in Church literature appeared in the late 19th century as the religion spread into Arizona and Mexico. In these areas, the plant grows abundantly and had been used by Indian tribes for centuries as both a medicinal remedy and a drink.

Mormon tea is found in areas with about 15 inches of rainfall a year where it grows in sunny sites with deep, well-drained soil. It is cold hardy to zone 5 and is planted in southwestern states for rangeland restoration and roadside erosion/beautification efforts. It could probably be grown in Arkansas as a rock garden plant, but one that might require a rain-roof to keep the plant dry during the winter and spring months.