FAYETTEVILLE, Ark. – I’m not a detail person so it is not surprising this personality trait informs the kinds of plants I like to grow.  Now that I have what my wife calls my “man cave” – really the brightest room in the house – I’m able to keep a good assortment of my succulents around me during the drab winter months. One of the tough, cute plants I’ve grown to admire is a bromeliad called Deuterocohnia brevifolia (synonym Abromeitella brevifolia). 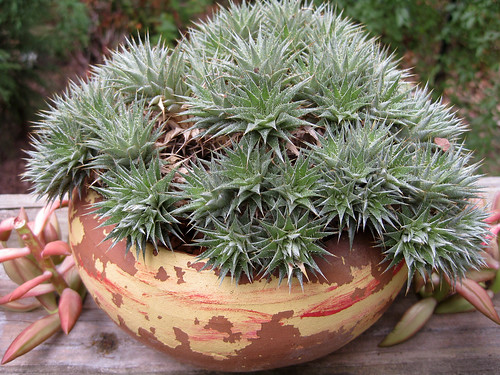 This tough little bromeliad has more in common with cacti than the typical vase plants of the tropical jungles. (Image courtesy Gerald Klingaman) .

This little plant is from the desert of northwestern Argentina and Bolivia where it grows in tight mounded mats of grayish green foliage to as much as three feet across. The mats are made up of hundreds of small, tight inch and a half rosettes of stiff foliage.  When grown in pots it tends to spread out uniformly in all directions and given enough time makes a mound of foliage in the shape of a basketball cut in half that completely obscures the pot.

The leaves have a sharp point and the margins of the leaves are also prickly, but the plant has the feel of a Brillo pad, not a cactus.  Unlike most bromeliads that store water in the inner whorl of vase like leaves, Deuterocohnia doesn’t store water for dry times.  It just tolerates drought extremely well.  In its native habitat it may go for up to a year without rainfall but manages to stay healthy and happy by absorbing moisture from fog.

My Deuterocohnia has never flowered and flowering does not seem to be all that common for I find no photos of them on the internet. But should it flower it is different than most bromeliads in that the flowering rosette does not die as is seen in most members of the family.

The plant was botanically described under its now obsolete synonym name in 1935. Its now-accepted name change to Deuterocohnia happened in 1992. Though not common in the local nursery and garden center trade it is widely available from specialty succulent grower on line.

I’ve named my Deuterocohnia “Leonard” because it lacks an easy to remember common name.  The genus is named after German botanist and bacteriologist Ferdinand Julius Cohn (1828-1898). Because Cohn already had a plant named after him, the botanist honoring him added the prefix “deuteron” (which means second or secondary) to Cohn’s name. Admittedly Leonard Cohn is not one of the Coen Brothers, but the fact that there are two brothers will help me remember its hard-to-remember Latin name.

Deuterocohnia is very easy to grow as a pot plant provided it has good drainage and one doesn’t get too heavy handed during hand watering. In the winter Leonard is kept in a bright room and watered every 3 to 4 weeks as the spirit moves.  In the summer it is relocated to a bright deck location that receives about 4 hours of direct sun during the middle of the day.  Watering is by what nature provides in the way of rainfall. Fertilization is erratic and on the light side – just enough to keep it slowly increasing in size but not enough to require frequent repotting. Propagation is by breaking off clumps of the branched rosettes and allowing them to root.