The other day I was walking my dog, a big long-legged labradoodle I call Winnie because he’s big as a horse, when I came upon a gray pumpkin nestled amongst the Halloween decorations of a neighbor’s display. Which got me thinking about the diversity of dogs and squashes. We now realize that the biological diversity of dogs – everything from the tiniest lapdog to my long-legged labradoodle lapdog – came from wolves. So, what about gray pumpkins? 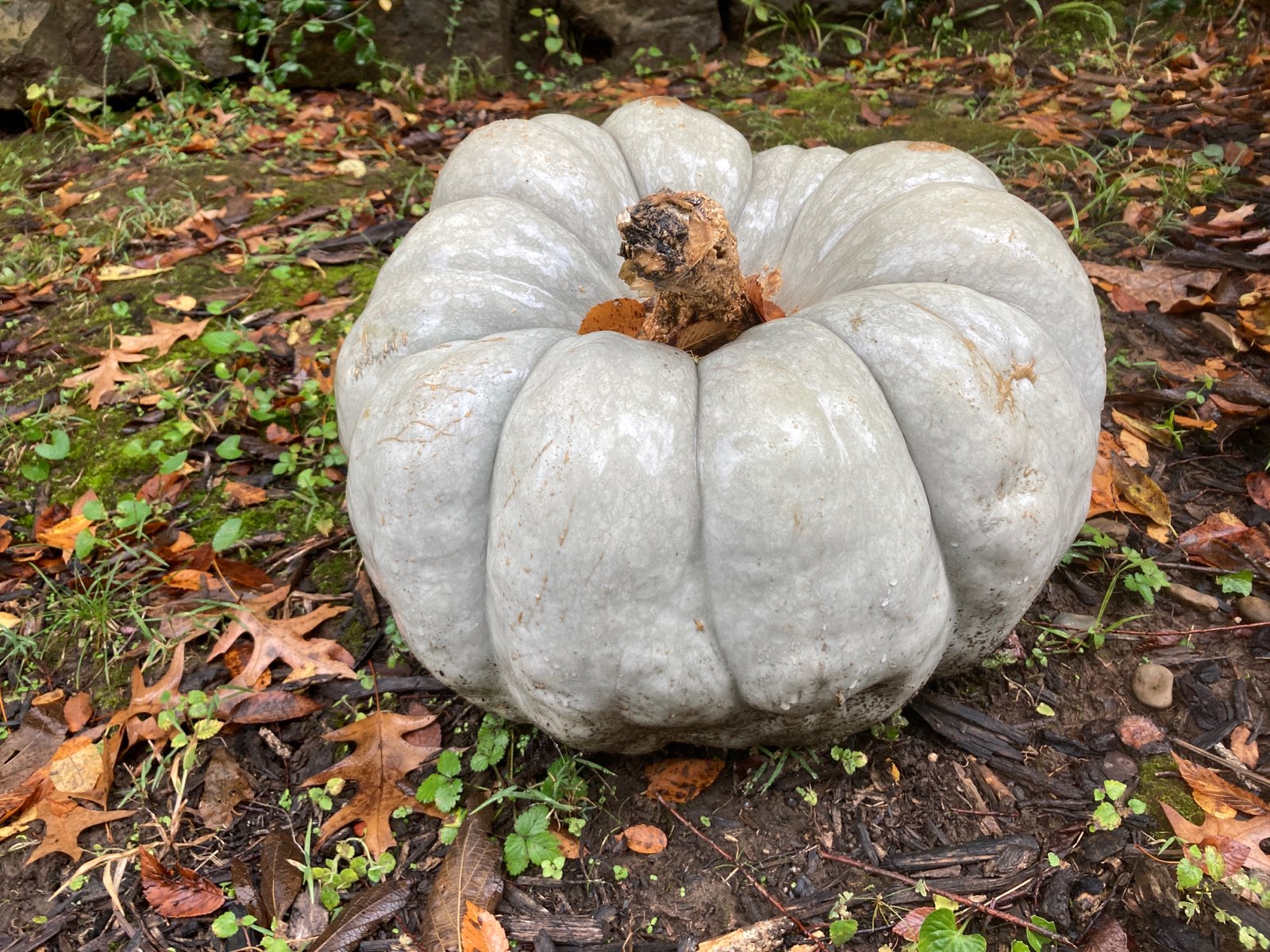 IT'S A VERY ODD PUMPKIN, CHARLIE BROWN — Everyone knows pumpkins are supposed to be orange, so how did we get a gray one? (Image courtesy Gerald Klingaman.)

The pumpkin in question is Cucurbita maxima “Jarrahdale,” a 10-pound winter squash that just happens to be shaped like a pumpkin. Of course, it doesn’t help matters much that pumpkins (botanically classified as selections of Cucurbita pepo) are but another form of winter squash. To further confuse things, the summer squashes such as zucchini and yellow squash are selections of C. pepo and are really winter squashes, except we eat them in their immature state.

The genus Cucurbita consists of 13 primary species, all found in the New World from the Southwestern United States to Argentina, with Mexico being the homeland of most species. Five of these are cultivated with the two listed above the most important. The generic name comes from the Latin name for a gourd, which is a hard rinded fruit from the African genus Lagenaria and includes the dipper gourds. Squash, a word derived from the Narragansett word “askutasquash” meant “eaten raw or uncooked,” and became the name Europeans used to describe one of the three main vegetable resources used by Native American tribes.

How the orange squash we now call “pumpkin” became associated with a Celtic pagan ritual we now call Halloween is an interesting and convoluted tale, but too long to tell here. Instead, let us consider the Jarrahdale pumpkin and how it came to be.

Jarrahdale is a small town of about 1,200 people in western Australia about an hour south of Perth. It is named for a forest of Eucalyptus trees that grew in the region prior to their felling in the early 20th century. After all the trees were gone, the region provided aluminum ore until it ran out in the 1960s. Now, its most famous export is probably the blue pumpkin. No one seems to know how (or when) it was developed, but one garden writer suggests it resulted from a cross between the “Blue Hubbard” squash and “Cinderella.” This latter selection is a red-tinged pumpkin shaped squash that adopted the name after the Disney feature film showing Cinderella’s famous ride became popular in the 1950s.

Both of these squash selections are old, probably dating back before 1880. Cinderella is probably an heirloom French variety that Burpee Seed Company began selling in 1883. Blue Hubbard was developed sometime after the Civil War by a Massachusetts seedman named James Gregory, who is thought to be responsible for selling the original tear-drop shaped Hubbard squash, circa 1855. Both of these have sweet, meaty, stringless flesh and are preferred by people who actually eat them instead of carving faces.

Squash species are mostly reproductively isolated, so crossing C. pepo with C. maxima is difficult whereas crossing within a species is easy, because Cucurbits produce flowers of separate sexes on the same vine. Once the cross is made, selecting out a true-to-type form is relatively easy and straight forward and can be accomplished in five or so generations.

But why is the squash gray? Certainly, gray is not a common color amongst fruit or flowers. To me, Jarrahdale is gray but some people may perceive it as a funky shade of blue. To understand this, it helps to remember that the color we perceive is what light bounces back from the surface cells. In black bodies, no light bounces back. In white bodies, photons of all wave lengths bounce back.

Two forms of chlorophyll are involved in photosynthesis but other pigments, including one called “pheophytin” aid in the process. This pigment name is coined by combining the Latin root word for “dusky” and “phyt” (plant). Generally, the word dusky means “dark” but one variation means “ashen.” Perhaps the epidermal cells of Jarrahdale squash contain an abundance of pheophytin pigments which can form from when chlorophyll breaks down late in the season.

Jarrahdale squash seeds are readily available in the seed trade. Plants are easy to grow in any good, rich, reasonably well watered garden soil. Planting time is usually counted back from when the fruit are wanted in the fall instead of rushing to get them in the ground as soon as soil temperatures warm in the spring. Fruit mature in about 100 days. Unfortunately, this squash variety is as susceptible to the pests and diseases that afflict all of the other Cucurbits.