Living on a rocky hillside, it is hardly surprising that loosely fitted rock pathways are used in my network of trails through the garden. Equally, it should be no surprise that I’ve tried growing all manner of little plants between these stepping stones to mimic the images you see in all the garden books. One that has done well in this setting is creeping mazus, Mazus reptans. 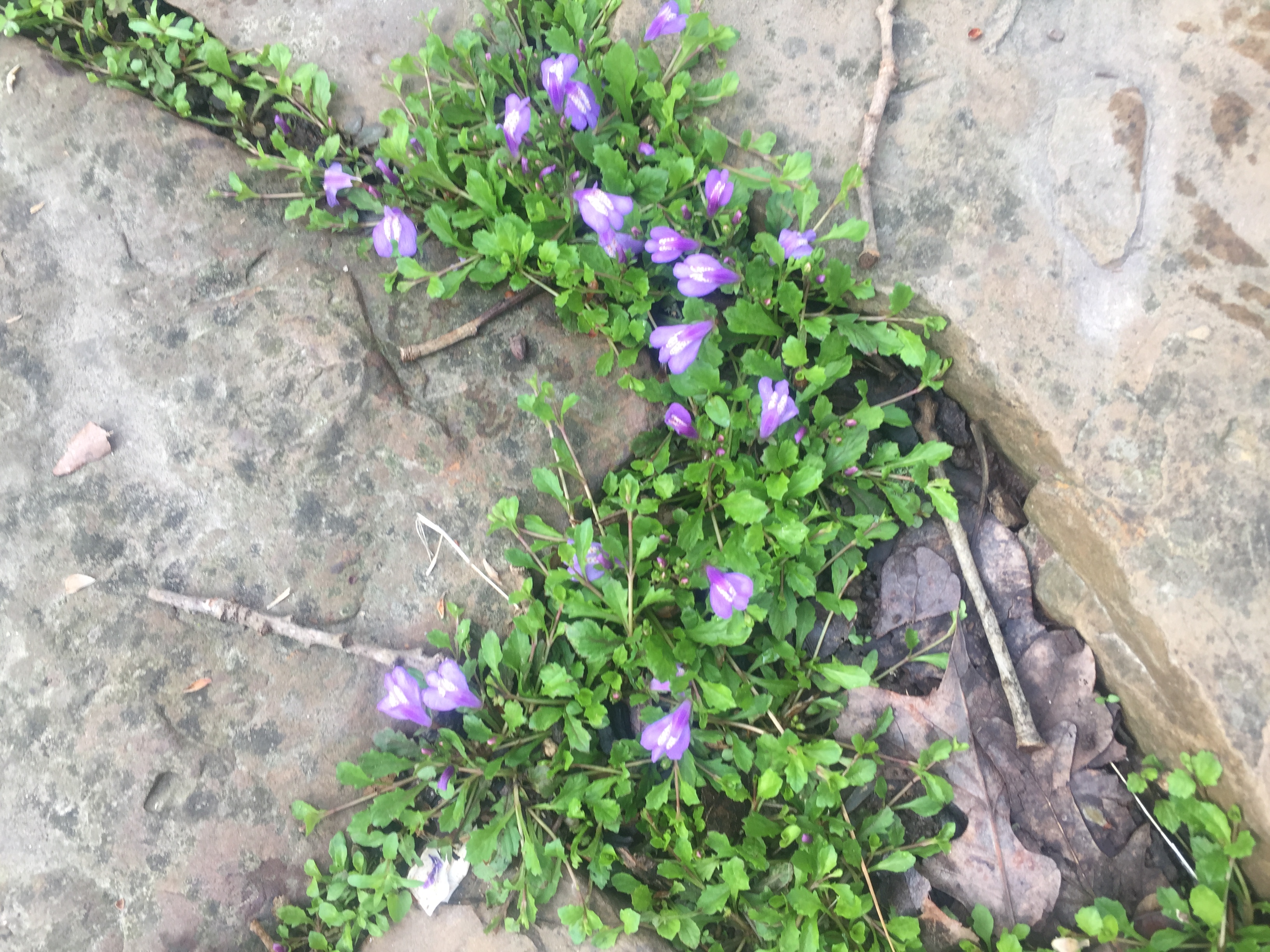 CREEPING MAZUS — Mazus is a two-inch-tall creeper that puts on an attractive blooming display despite its diminutive size. (Image courtesy Gerald Klingaman.)

Creeping mazus is one of about 30 species of herbaceous perennials from China (20 species) and surrounding countries, ranging from New Zealand to India. This species is described as coming from the Himalayan mountains of Southeast Asia but is not listed in the Flora of China.  About a decade ago it was assigned to its own family, the Mazaceae, but historically it has mostly been known as a member of the snapdragon family.

Creeping mazus is a semi-evergreen perennial that grows about to about 2 inches tall and spreads sideways via surface stolons that root when they come in contact with the ground. It has spatulate, coarsely toothed leaves to an inch long. Leaves on the horizontal stolons are opposite whereas those on stems arising from the basal rosette of leaves are alternate.

Given the diminutive nature of the plant, the lavender flowers are relatively large. The flowers appear from mid spring through early summer on lax, indeterminate scapes held just above the foliage. The ¾ inch-long flowers are tubular but with a prominent fused lip that is marked with a yellow-dotted white band. A white flowered selection called ‘Alba’ is common in nursery lists.

Mazus reptans is a commonly listed plant on Internet sources, yet finding definitive information about it has proven difficult. I find the species name listed in Bailey’s Cyclopedia of American Horticulture (1916), but not in Everett’s illustrated encyclopedia (1964) nor the German Hardy Herbaceous Perennials (1990). Mazus miquelii is native to China and Japan and, at least from the photos depicting it on the internet, looks to be the same plant. A recent study by a Canadian botanist describing Mazus found as escapes in the United States proposes that M. reptans be included with M. miquelii.

Miquel’s mazus is shown on the USDA’s Plants Database map as found growing wild in areas from Maine to Michigan and North Carolina. Though it has been found in these northeastern states, it seems to have not caused much alarm amongst the native plant purists.

The garden renaissance of Mazus reptans – a plant we should probably call M. miquelii – likely started with the wave of new plants that were being promoted in the 1990’s. A west coast nursery that heavily promoted the small plants for lawn substitutes and for planting between stepping stones called their creeping mazus by the species “reptans”, and the name stuck.

Regardless of what we call it, this plant is an easily grown, quickly spreading creeper that can be used in the rock garden, planted between stepping stones or used as a lawn substitute. In the trial garden on the UofA campus in Fayetteville, we had a small patch planted as a lawn, but after a couple years it melted away, possibly because of a cold winter, failure to keep it moist enough during the summer or some root rot malady. It is best used in bright locations in the garden that receive some shade during the hottest part of the day. It is rated as hardy from zone 5 through 8, but seems to favor areas with cool, moist summers and mild winters.