Even the finest greenery will become passé if it is too easy to grow. Cast-iron plant (Aspidistra elatior) is such a plant. During the Victorian era it was the darling of every drawing room, boarding house, bank lobby and upscale barroom, but subsequent generations of gardeners cast it off in favor of more intriguing fare. Some claim that Aspidistra’s success in Victorian homes was the modern genesis for houseplants inside our homes. 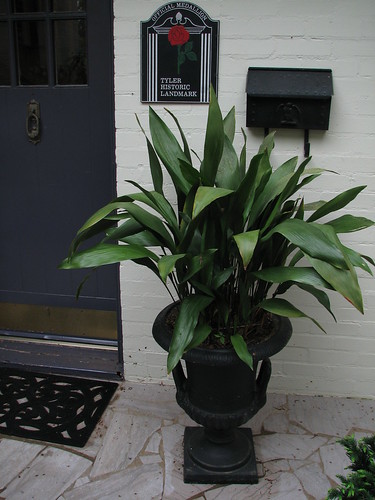 Aspidistra is an evergreen understory plant belonging to the asparagus family. It is native to islands on the southern end of the Japanese archipelago and probably Taiwan. Once thought to consist of only a few species, as many as 90 species have been described since China opened in the 1980’s. This species, the only one widely grown in the United States, has creeping rhizomes that produce petioled, 20-inch-long and 4-inch-wide flat evergreen leaves that make dense, slow spreading clumps that reach heights of 30 inches in mild climates.

Seldom noticed solitary, purple, bell shaped flowers are produced just above the ground in the forest duff in the spring. Long thought to be pollinated by slugs, it is now known that various terrestrial amphipods, small shrimp like creatures, and a variety of insects found in forest duff perform the function. The fruit is a single seeded berry.

The first aspidistras arrived in Europe in the 1820’s and, because of the new plant craze that swept Europe and especially England during the Victorian era, it became a popular parlor plant during that time. It was also the time of the great fern craze, so Victorian parlors filled with all manner of ferns and other “stove plants,” as houseplants were known. But Darwinian principles apply with houseplants too, so after a time survivors emerged. Aspidistra and Sansevieria (mother-in-law’s tongue) were standout survivors and lead the way as common houseplants for several generations.

That aspidistra became known as cast-iron plant during the height of the Industrial Revolution is fitting, because this tough plant could have easily stood up to the conditions of the factory floor. It just sat there and survived neglect, low light and ever-deepening layers of dust. Beer plant became a common name because it often graced bars where bartenders watered it with the dregs from the bottom of beer glasses.

In 1936 George Orwell – best known for his 1949 novel Nineteen Eighty-four – published Keep the Aspidistra Flying. In this book the main character, Gordon Comstock, chucks the material world and tries an existence without money. By the end of the novel he relents, gets his old job back and marries his sweetheart, Rosemary. In the closing pages, they have their first argument as a married couple over his insistence they purchase an aspidistra to sit beside the occasional table. To Rosemary an aspidistra is an “awful depressing thing” but to Gordon, “It’s the first thing one buys after one’s marriage,” a notion he developed walking the mean streets of London as he looked into flats during his period of moneyless exile.

Aspidistra will grow outside in all parts of Arkansas, but in my garden where it has grown for almost twenty years, it’s evergreen foliage is killed to the ground whenever temperatures reach 20⁰F. In south Arkansas it is reliably evergreen; in central areas it is evergreen in protected locations. In the garden it is used as a groundcover for dry shade or as a ring around the base of shade trees.

As a houseplant it is almost indestructible. Because it lives so long, it should be grown in 8-12-inch containers, and when repotting is needed, the original plant divided. Keep the pot size in that range or a plant too heavy to lift will be the eventual fate. The plant will tolerate any low light corner during the winter months and then renew itself when moved outdoors to a shaded patio during the summer. Too much sunlight causes the foliage to bleach out and yellow.