Distinctive looking plants often make an initial splash and then, if they remain popular in gardens, get a muddied backstory that is difficult to untangle. Meyers Foxtail Asparagus fern (Asparagus densiflorus ‘Meyersii’) is such a plant. 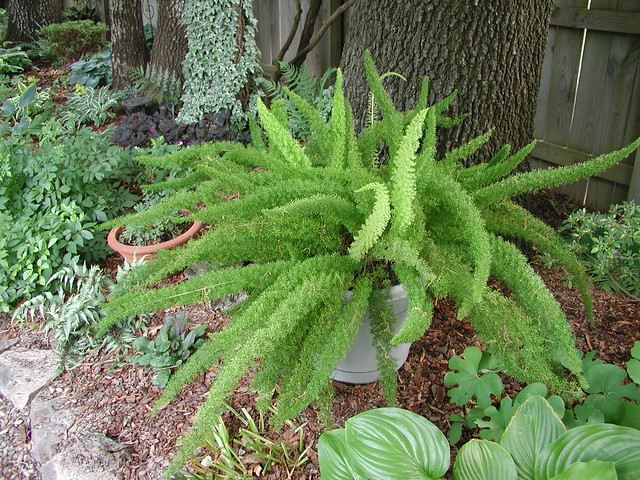 Most of the 300 or so species of Asparagus are from Africa, the Mediterranean region and parts of Central Asia. The ornamental asparagus ferns originate in South Africa and, according to the taxonomic whims of the moment, can be lumped into the species densiflorus or separated out into three or four different species.

This species is a sprawling and scrambling evergreen plant arising from a dense crown of matted roots supported by grape-sized tubers that are produced just below the surface. Slender, arching stems arise from the crown and grow 3 feet long or longer. Asparagus have no true leaves — instead, photosynthesis is carried out in the green stems and modified, leaf-like branches called a cladophylls.

In the species, the main branch is much branched and often forms little tufts of these leaf-like cladophylls. In “Sprengerii,” an 1895 seed-propagated selection, the branches are shorter, more compact and darker green than the typical form. Sprengerii fern, found by the German nurseryman Carl Sprenger (1846 – 1917) who ran a nursery in Naples, Italy, has long been the standard “asparagus fern” and is grown by the millions each year as a basket plant, filler or in the flower border.

Meyers Foxtail fern has a murkier backstory. It has a more upright form than Springer fern because the branches only get about two feet long so are less likely to arch over. The pseudo-leaves are produced on short side branches and create a green, bottlebrush appearance. Both the Sprengerii fern and the foxtail fern produce pea sized, white multi-petaled flowers in late spring and early summer that can be followed by bright red berries in the fall. Sprengerii ferns produces berries freely and has escaped in California and Florida but the foxtail fern is shyer about fruiting and has not been reported to have escaped cultivation.

Several sources suggest foxtail fern may be named after the USDA plant explorer Frank Meyer (of Meyer Z-51 zoysiagrass fame), but I favor the explanation given by the South African National Biodiversity Institute. They state that an East London nurseryman named Meyer obtained some compact growing plants from the Eastern Cape Province of South Africa, and apparently after selecting and crossing to create more compact forms, came up with a true-breeding bottlebrush type that now bears his name.

When this happened is unclear. I find “Compacta” mentioned by 1916, but the growth form appears wrong. A southern California nurseryman named Horace Anderson (d. 1981) claimed credit for introducing the foxtail fern into the United States, probably during the 1960s. His grandson, Eric Anderson who operates Anderson’s Seed Company and is a major supplier of seeds of the foxtail fern, says that Horace received a few samples of the plant from a South African supplier and eventually got them before a national audience through the Hines Nursery Company. Everett does not mention it in his encyclopedic work in 1964 but Alfred Graf illustrates it a decade late in his Exotic Plant Manual.

The foxtail and Sprengerii asparagus ferns are easy to grow in containers and stand up well as houseplants indoor, at least if one has a tolerance for drooped pseudo-leaves when the indoor humidity gets too low or if the location is too dark. These plants are hardy out of doors south of zone 9 but, if used in colder climates, must be overwintered where the temperature does not drop below 25⁰F.

Any good potting soil will produce good growth as long as it is fertilized during the growing season. Plants will tolerate dry conditions, but uniformly moist pots produce the best growth. They are best in bright light conditions but too much heat and light in midsummer will tend to cause plants to yellow. Propagation is usually by seed but old clumps may be divided in the spring before new growth starts.