My fondness for cacti and succulents is complicated. I like to contemplate the many ways their physical forms have been modified over time to survive difficult environments. Being a lazy gardener, I also appreciate their toughness and their tolerance of my sometimes-neglectful ways. And then some of them are just so cute such as the tiger aloe (Aloe ariegate). 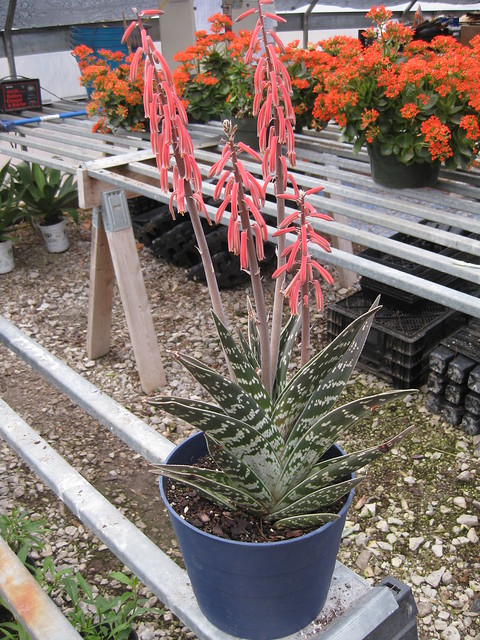 About 400 species of aloes have been described from Africa, the Middle East and Madagascar, where they range from small, clump-forming succulent herbs to small trees. Tiger aloe is native to the southern tip of Africa and has been grown in gardens there since the late 17th century, when the Dutch East Indian Company first established control of the region.

Tiger aloe is one of the smaller aloes, growing only about 10 inches tall in leaf.  It is a slowly spreading, clump-forming stoloniferous plant with 3-ranked leaves terminating in a blunt point. The plants have a rough, textured, warty feel and are marked with irregularly spaced oblong white crossbands along the leaf.

Spikes of bright orange flowers appear in mid winter from the terminal cluster of leaves.  Individually the flowers form a narrow tube with six petals and are about an inch long. A closely related species, A. slandeniana, occurs at the drier end of the range for tiger aloe but has chubbier leaves and slender pink flowers.

Back in the day, I knew aloes as members of the lily family.  es, this family was impossibly large and included a bunch of plants that didn’t look at all alike, but it was convenient.  No more.  Thanks to the use of DNA technology and international cooperation between botanists, the lily family has been busted up. Aloe belongs to the Xanthorrhoeaceae family (Australian plants that look like a cross between yucca and big bluestem), subfamily Asphodeloideae.

I appreciate and use plant families because it gives me a handle on understanding something about plants that are new to me.  In this case – in a kind of botanical horse trading – the botanists lumped three closely related subfamilies together in their 2009 meeting into an umbrella classification based on their close DNA relationship, but separated them into subfamilies because they just didn’t look very much alike. I generally like the idea of lumping things together, but this time I think they missed the boat.

Tiger aloe is an easy aloe to grow.  Its small size makes it a good fit for a coffee table or windowsill plant and its easy culture makes it a sure bet for even gardeners with brown thumbs.  It should be kept in smaller pots, usually under six inches in diameter. A well drained potting mix designed for cacti and succulents can be used or you can combine an organic potting soil with one third coarse sand. Adding a teaspoon of lime to the mix will also be beneficial.

Aloes are hard to overwater as long as the pot is well drained. In the winter cut back on watering, but in late January increase the watering schedule as the flower spike emerges. Fertilizing in the spring, when the plant is moved to a shady area outside for the summer, and again in the fall when it is brought in, should keep it growing and flowering well.  Propagation is easy in the spring by division.