Last week our little Silver and Gold Chrysanthemum was flowering.  It is a multiple purpose plant with attractive, silver margined leaves that give the foliage an attractive appearance until the yellow, button-like flowers appear in late fall.  But this little plant suffers an identity crisis:  no one knows what to call it. 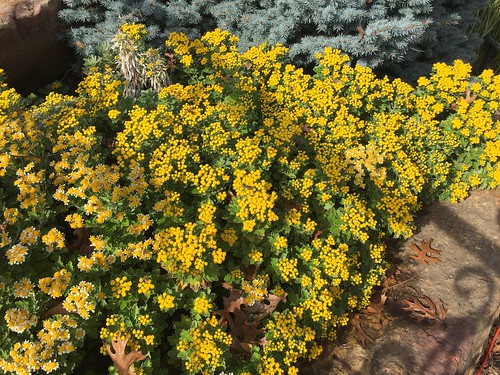 Ajania pacifica, more commonly listed on the internet as Chrysanthemum pacificum¸ is one of 35 species of composites belonging to the genus Ajania that are described in East Asia from Russia, Japan, Korea and China.   This species, native to Pacific-coastal regions of the main island of Japan, grows in coastal regions at elevations up to 300 feet.

Plants are sprawling, herbaceous or semi-woody (in mild regions) plants that spread by underground rhizomes.  Plants may reach ten to eighteen inches tall with a spread up to three feet.  Leaves are two to three inches long, deeply lobed and marked with a bright, silvery-white margin.  The under-surface of the leaf is covered with a silvery-grey pubescence with the upper surface deep green.  The summertime appearance of the foliage, along with the sprawling habit, makes this species suitable as a groundcover.

In late autumn, plants produce terminal clusters (about four inches across) of ray-less golden flower heads about the size of a dime.  Because they bloom so late in the season, the bloom display is often more sporadic than the display shown in the accompanying photo.

This species had a tortuous time in settling on a good name.  Even the common name, silver and gold chrysanthemum, is confusing unless you know the plant well.  This species was first identified in 1928 in Japan and given the name Chrysanthemum pacificum.  In Hortus III, my go-to reference about plants in cultivation prior to 1970, I find no mention of it under any of its three names so it was either unknown or little-grown in the United States prior to the publication of that book.  I first saw it in the 1990’s when the new plant craze struck full force.

In 1955 the genus Ajania was established by a Russian botanist, who Latinized an Eastern Siberian town and rural administrative region called Ayan, for a plant he found in the area.   Then, in 1978 an attempt to clean up the notoriously confused daisy family was made, and Silver and Gold Chrysanthemum was transferred to the genus Dendranthemum.  That revision didn’t suite a lot of botanists, so the plant was transferred to Ajania in 1993, but in the process redefined the widely recognized genus Chrysanthemum, splitting it into half a dozen different genera.  That redefinition suited no one, so most horticultural types ignored the revisions and stayed with the familiar name Chrysanthemum.

Silver and Gold Chrysanthemum is an easy to grow plant suited for full sun or light shade.  It is hardy from zone 5 through 9 and tends to be long-lived in most garden situations.  It has good drought tolerance.  Propagation is easy by springtime division or summertime cuttings.  Use it as a groundcover or an addition to the front of a mixed border.  It is quite insect and disease resistant.