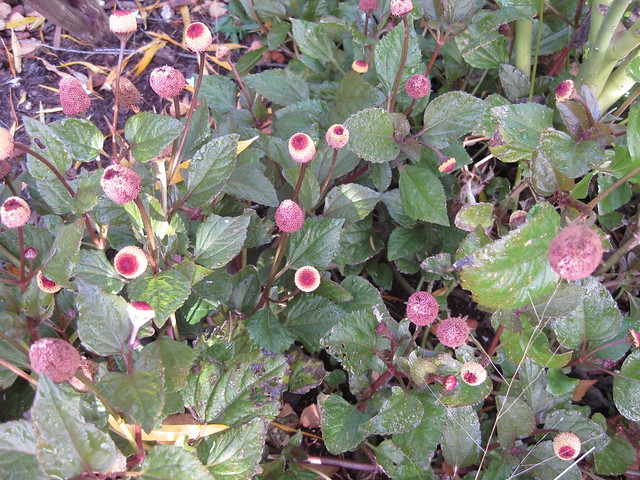 Eyeball plant is one of about 30 species of annual and tender-perennial herbs of the daisy family originally native to South America, with this species probably native to Brazil. The commonly grown ray-less flower form is not known in the wild. The cultivated plant that now grows everywhere in the tropics of the Southern Hemisphere and warmer parts of Asia was probably introduced to the Indian Ocean Islands by Portuguese seamen in early times. Its distribution throughout much of its current range probably is a result of laborers distributing it during the railroad building boon at the close of the 19th century.

In the temperate garden world eyeball plant is a fast growing, warm-weather annual that can be grown from seeds or cuttings. It reaches 12-18 inches tall and wide with opposite, simple, petioled leaves with coarsely toothed margins that are 2-4 inches long.

Flower heads are produced singly atop a terminal stem and are about the size and shape of an olive. Heads consist of only small disk florets and lack the more showy ray flowers typically seen on members of the sunflower family. The basal portion of the head is bright yellow with the less mature apical florets red or maroon in color, giving the heads the appearance of an eyeball. Flowering is more or less continuous throughout the growing season.

Though this is a widely naturalized weed in most parts of the tropics and has been used as a medicinal herb and spicy food additive throughout its naturalized range, it was little known in the United States nursery market until the early years of the 21st century. The initial buzz about the plant was from the herbal remedy community but the plant’s potential as a new ornamental seems to have brought it to the attention of most people.

The flower heads can contain as much as 1.25 percent spilanthol, a fatty acid amide, which is also present in the foliage. This compound produces a pronounced local buzzing sensation and heavy salivation because it is readily absorbed through the soft tissue of the mouth where it provides a numbing and cooling effect. It is used as an herbal remedy for dealing with the pain of toothaches and other oral ailments. Toothache plant is also used in regional foods to flavor salads, soups and mixed with chilies in hot sauces.

Eyeball plant is an easy to grow annual that adds interest to the sunny garden where the continual production of flowers provides a distinctive appearance. The flower buds are safe to eat and can cause all manner of entertainment and interaction with your grandchildren and gardening friends. It is best grown in an average garden soil in full sun. Plants should not be planted out until the danger of frost is past and the soil has warmed.