Can you please tell me what this plant is? We have it in the house in the winter and on the front porch in the summer for about 10 years. Will it survive on the covered front porch if we leave it out this winter? 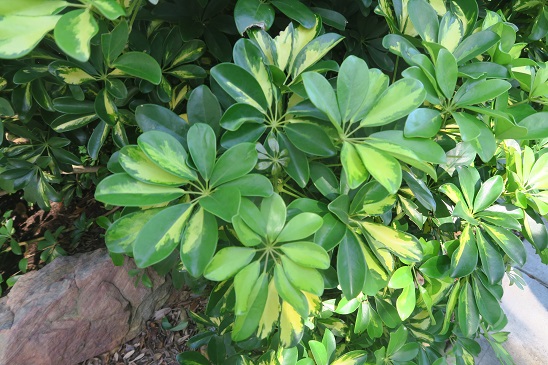 I hope you have moved it inside, because it is a tropical houseplant called scheffelera and it will not survive freezing temperatures.  I recommend moving plants in usually by mid-October when inside and outside conditions are similar, but for sure before you turn your heat on for the first time.

I have a Scheffelera houseplant which has tiny white things on it. What should I do?

Tiny white things could be mealy bugs or scale. Typically mealy bugs will congregate in the joints where the stems are attached to the trunk or where the leaflets are attached. Scale can be on the leaves or stems. For mealy bugs, you can use a q-tip dabbed in rubbing alcohol and dab the areas, repeating again in a week. For both mealy bugs and scale, you can use a houseplant product called Bayer Advanced Insect Control plus fertilizer, which contains imidacloprid. You push a spike into the soil and it works from the inside out.

I received a beautiful 3ft tall schefflera plant in Sept as a gift upon my mother's death. Since then it has lost over half of its leaves, some brown and dry others green and healthy looking, some with brown spots. It is in a bay window facing east but does get some direct morning sunlight from the southeast window. Some new growth has appeared, but even those leaves drop. I haven't over-watered and have fertilized once. Help - I really don't want to lose this plant.

Make sure that the pot has a drainage hole and that there is no standing water at the base. Overwatering is usually the cause of houseplant woes, but occasionally under watering also occurs. When you do water, let the water pour through the container, making sure that the entire root ball has moisture. Then throw away the excess water that has poured through. Typically in the winter, houseplants only need watering every two weeks or so. Morning sunlight is ideal, but make sure it is getting enough light, and turn the pot occasionally—you might find a brighter location for it now. Winter is often tough on indoor plants, since we have little humidity and even lower light. I would not fertilize during the winter, since there is little new growth. Once we start having longer days it should start to perk up. Once spring is here, repot it and move it outside and see if it doesn’t thrive.

I have a Schefflera that we have had outside all year. (Was given to us). It is about 3 ft wide and about 4 1/2 ft. tall. Can I trim it "down to size" before bringing it in? I do not have room for it as it is anywhere.

Your plant is more than likely going to die back a bit on its own once you move it back indoors. I am surprised there isn't damage already, since we have had some very nippy nights, even without a killing frost in parts of the state. Cut back as little as possible to make the move indoors, and then watch it for the next few weeks. It is going to have a big shock going from temps in the 30's and 40's to a static 70 degrees, plus lower light and no humidity. Next year, try to bring all houseplants back inside no later than mid October.