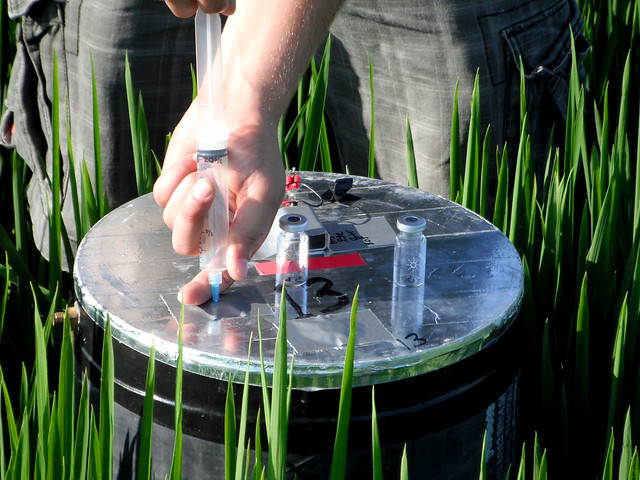 A new frontier of study in greenhouse gas emissions is in furrow-irrigated rice with a novel tailwater recovery system, which recycles unused irrigation water to the top of the rice field to maintain a more consistent soil moisture level across a wide area.

Based on several Arkansas Agricultural Experiment Station studies investigating greenhouse gas emissions in rice cultivation, a consistent soil moisture level just below saturation decreases greenhouse gas emissions in rice fields. One major concern is with nitrous oxide, which is about 300 times more potent than carbon dioxide and about 10 times greater than methane in terms of global warming potential.

“I think we have some positive results that can really help the environment,” said Kristofor Brye, University Professor of applied soil physics and pedology for the experiment station, the research arm of the University of Arkansas System Division of Agriculture. “I’m pretty convinced that if we can control how the water is managed, we can control greenhouse emissions.”

“In furrow irrigated rice, there is a large potential for nitrous oxide emissions from the soil getting too dry between irrigations,” Henry said. “This system appears to inhibit both methane and nitrous oxide emissions. With this system you get the same greenhouse gas reductions possible with alternate-wetting-drying but with the labor savings, tillage reductions and simplicity of furrow-irrigated rice.”

Normally in furrow-irrigated rice, the upslope and mid-slope remain about the same while the downslope is flooded. It leads to management issues, harvest moisture differences and potentially variable plant productivity, Henry said.

“The lack of fluctuation in soil moisture will really shut down N2O emissions,” Brye said. “If we can keep the soil moisture as constant as we can, just below saturation, that would be the happy medium. And Dr. Henry’s recirculating tailwater system is one that could achieve that.” 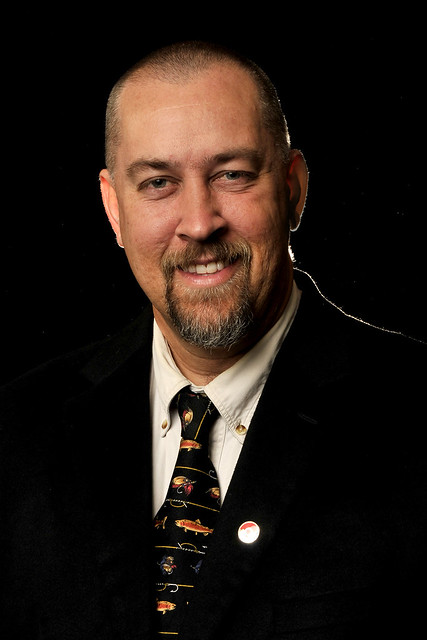 Results of the study, conducted in 2018 and 2019 at the Rice Research and Extension Center, were published in March 2022 and concluded that the “no-tillage” method resulted in “significantly less” nitrous oxide emissions over the growing season.

Brye specified their “no-tillage” management was a “stale seedbed” approach, no-tillage in which there was no manipulation of the bed within the season and the bed was not disturbed until the spring, when a furrow runner was used and drill-seeding occurred.

Della Lunga will use the 2018-2019 field study from Stuttgart conducted with Brye and Slayden to calculate global warming potentials from the combination of tillage treatments and site positions using observed emissions data.

Brye said their prior studies on alternative water management schemes in flooded fields showed that mid-season draining, and alternate-wetting-and-drying methods essentially broke even on methane and nitrous oxide.

Now, Brye would like to push the study further and answer a couple of looming questions: What is the total global warming potential and how can emissions be further reduced when coupling the tailwater recovery irrigation system in furrow-irrigated rice with “no-tillage” planting? He has written several grant proposals in attempt to fund the next research steps.

Until then, Brye and Henry point to the data collected showing the potential for reducing greenhouse gases with these methods.

Furrow-irrigated rice is growing in popularity with rice farmers because it provides more options in crop rotation, cover crops, and “no-tillage” methods. The development of drought-resistant hybrid rice cultivars has allowed furrow-irrigated rice production systems to increase in use.

According to the 2021 Arkansas Agriculture Profile (https://bit.ly/2021_ArkAgProfile), Arkansas continues to be the nation’s top rice producer. Slayden points out in her study that previous research indicates flood-irrigated rice cultivation alone accounts for 9 to 11 percent of agricultural methane production globally, and methane emissions from rice cultivation have been predicted to increase 2 percent by 2030, according to the U.S. Environmental Protection Agency report, “Global Non-CO2 GHG Emissions: 1990-2030.”

Support for the greenhouse gas in rice research was provided by the Arkansas Natural Resources Conservation Service (NRCS), which is part of the U.S. Department of Agriculture. The U.S. Department of Energy, Arkansas Rice Research and Promotion Board, and Arkansas NRCS have supported the tailwater recovery irrigation system research.