By Ryan McGeeney
U of A System Division of Agriculture
Dec. 22, 2016

LITTLE ROCK — 2016 proved a difficult year for many Arkansas growers. Severe flooding in August impacted production to the tune of an approximately $50 million crop loss, and an unprecedented political season cast doubt on the future of international trade agreements and farm subsidies. 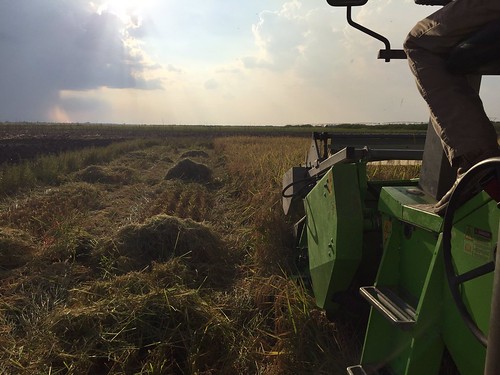 Based on an informal poll of agricultural experts across the state, here are our top 10 Arkansas agricultural stories of 2016:

1. Widespread reports of dicamba drift injury in soybeans, as some growers begin in off-label applications on new dicamba-resistant Monsanto crops. We covered the initial reports of drift injury in July, as well as some of the fallout, as the Arkansas State Plant Board weighed its options as Monsanto edged toward bringing a new dicamba-based herbicide technology to market.

2. Arkansas growers suffer nearly $50 million in crop losses due to significant August flooding, and a disaster declaration issued. After weeks of heavy, intermittent flooding in August, agronomists and economists with the Division of Agriculture estimated a significant economic loss for Arkansas producers. Arkansas Governor Asa Hutchinson a federal disaster declaration for 12 counties.

4. Tony Windham steps down as director of the Cooperative Extension Service after 28 years with the University of Arkansas System. After initially working with Arkansas growers as an economist in 1988, Windham was eventually appointed associate vice president for agriculture and director in 2010. Mark Cochran, vice president-Agriculture and head of the Division of Agriculture, named Dr. Rick Cartwright as interim director.

5. Arkansas officials visit Cuba as the U.S. considers lifting trade sanctions. As a major producer of both rice and poultry, Arkansas may prove particularly attractive to the island nation as a future trading partner.

7. Trans-Pacific Partnership trade deal appears to stall as voters chose between two presidential candidates, both of whom stated they were against it. After months of diplomacy and wrangling, the wide-reaching trade agreement, which would broadly liberalize trade rules and tariffs, may ultimately fail to come to fruition. In March, Ambassador Darci Vetter of the Office of the U.S. Trade Representative spoke about the proposed trade agreement at the University of Arkansas at Little Rock William H. Bowen School of Law.

8. Arkansas cotton growers rebound from 2015’s historic low acreage of 210,000 acres, planting about 57 percent more acreage. Although we’ve never strictly been “the land of cotton,” growers on the Arkansas side of the Delta came back strong with increased acreage.

9.Kudzu bugs expand in eastern Arkansas. After almost five years of waiting, the inevitable finally arrived: Kudzu bugs made their way across the Delta, into Arkansas, poised to begin affecting soybeans in the fall. Division of Agriculture etymologists and agricultural agents wasted no time in training county agents in identifying and controlling the pests, in an effort to arrest their further spread.