As kudzu bugs move toward Arkansas soybeans, patience is key to proper control

By Ryan McGeeney
U of A System Division of Agriculture
July 8, 2016

HELENA, Ark. — After almost five years of waiting, the inevitable has finally arrived: Kudzu bugs have made their way across the Delta, into Arkansas, and are poised to begin affecting soybeans in the fall. 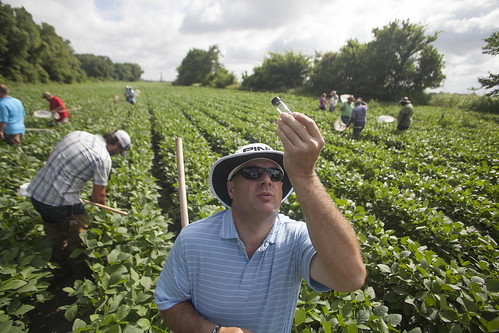 The pest, which overwinters in kudzu, was first detected in Arkansas in 2013, mostly in small numbers. Robert Goodson, Phillips County agricultural agent for the University of Arkansas System Division of Agriculture, said that only within recent weeks had the pest been discovered in large numbers in a commercial soybean field near Helena.

“It’s an unusually high amount,” Goodson said. “We’ve never had these numbers in the state of Arkansas before. We found them here in Phillips County last October for the first time.”

Nick Seiter, extension entomologist for the Division of Agriculture, said research in North Carolina had shown that, left unchecked, heavy concentrations of kudzu bugs can sap the vigor of soybeans in the field, and lead to large-scale yield losses. However, growers were unlikely to see such concentrations in real-world scenarios, and that growers who actively scout their fields will be in the position to effectively control the pests before they inflict serious damage.

The key, however, is recognizing the pest’s true threat: the nymphs, rather than the adults, Seiter, Goodson and others said.

Addressing a group of about 20 Cooperative Extension Service agricultural agents from throughout the Delta region on Wednesday, Seiter emphasized the importance of growers focusing not on the adults, which are mobile, but on the nymphs, which will stay on a given plant and do far more damage.

“If you find a lot of those, if it’s your first time, you’re going to panic a little bit,” Seiter said. “What’s happened in the southeast, in just about every state it’s come over, is, people have tried to spray those adults. And they end up in that situation where you’re putting out multiple sprays, trying to control these adults that are coming right back into the field.”

The treatment threshold for kudzu bugs is 25 nymphs per 25 sweeps, Seiter said. Because the insects have a maturation window of about six to eight weeks from nymph to adult, growers will have plenty of time to control them.

Controlling kudzu bugs in soybeans will bring trade-offs, extension experts warned. Gus Lorenz, extension entomologist with the Division of Agriculture, said spraying pyrethroid insecticides will likely impact beneficial insects, including nabids and parasitoids, which would in turn lead to greater management challenges regarding pests such as boll worms and loopers.

“It’s the whole complex of predators and parasites we have in the field that maintain those populations below treatment level,” Lorenz said. “When you spray a pyrethroid and wipe them out, it kind of opens the door for those other pests.”