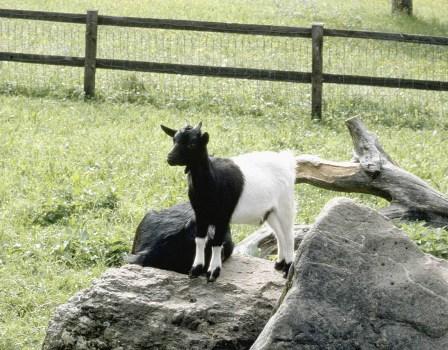 One of the biggest health problems faced by small ruminant producers in the southeast and south central U.S. is internal parasites. Internal parasite management, especially of Haemonchus contortus (barber pole worm), is a primary concern for the majority of sheep and goat producers. These parasites have become more difficult to manage because of developed resistance to nearly all available dewormers.

We have all become accustomed to having several highly effective drugs to select from for the treatment of worms, but as the level of parasite drug resistance increases, these drugs are not the easy solution they once were. Drug resistant worms are spreading and new products are not available. As a result, producers must begin thinking more creatively about how to effectively control worms in their animals. No longer can we recommend control programs based on drug treatment alone that will be satisfactory for most producers. Producers must design an integrated parasite control program because the numbers of worms, their impact on your herd and their level of resistance to drugs will vary from farm to farm.

What are the most important worms to be aware of for small ruminants?

In order to use anthelmintics (dewormers) and other means of parasite control most effectively, there are some facts about the life cycle, which are important to understand.  Adult female worms produce eggs that are passed in manure. Larvae hatch out and go through several stages of development in the environment before they can infect the next host. During the warm months of the year, enormous numbers of larvae can build up on your pasture.

Virtually all these worms need grass for successful development; they do not successfully develop on dirt.

The success of larvae outside the host depends on the climate. Moisture and warmth (50 degrees F and above) are necessary for development and survival. Dry weather is very hard on these larvae once they are out on the grass. 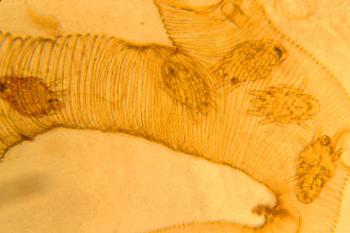 Drawing of a blood vessel with several parasites inside it. The blood vessel is gold in color with the parasite bodies tinged in red so they are more easily seen. (Image courtesy of USDA.)

Haemonchus larvae can also undergo a process called ARRESTED DEVELOPMENT where they sit quietly in the stomach following infection and don't become adults until several months later. This is an important adaptation for keeping the worm around through cold winters when eggs and larvae don't survive well on pasture.

The worms that became arrested in the fall resume development in the spring and reproduce.

This information can be used in several ways to target parasite control for times of the year when it will have the greatest impact.

Worms are a part of the natural sheep and goat world. We cannot eradicate them as long as sheep and goats are on pasture. The goal is to maintain the parasites at a level that will not produce any illness or economic loss.

Because the problem of drug resistance is steadily increasing it is important for each producer to look at his/her management system as a whole and find things beside drugs that will help control parasites and create a holistic management program. Remember, anytime we rely on a single product or method of control the worms will eventually adapt and outwit us.

If you include some of the following techniques, the need for frequent deworming treatments should be reduced.