Chert as common as dirt in the Ozarks

I guess I’m a bit of a rock snob. I like rocks and often pick them up wherever I go, but one of the most common rocks here in the Ozarks — chert — seemed just boring. It is too small to build a flowerbed from; too chunky for a proper stone mulch and altogether just too common. But I began to appreciate it more when I learned how it has been the grit that has shaped the appearance of the Ozarks. 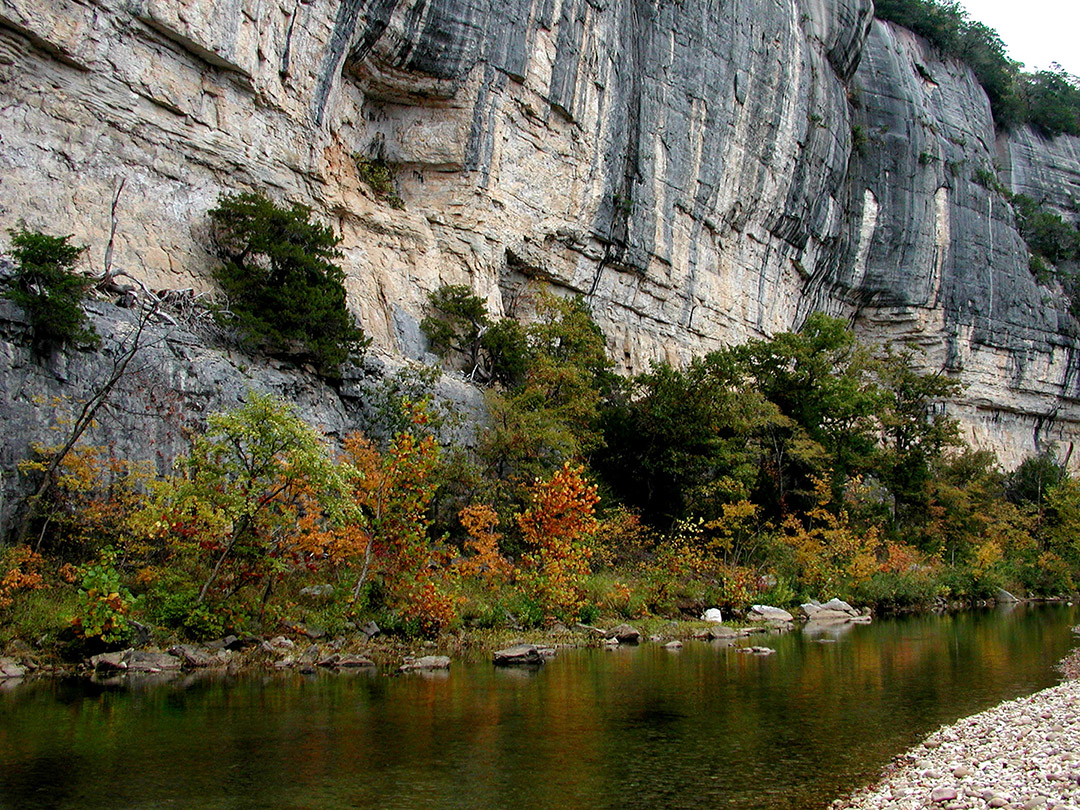 Roark Bluff along the Buffalo National River owes its grandeur to the abrasive nature of chert.

Understanding what chert is and how it forms takes a bit of explaining, and even then, it may be wrong because there is not universal agreement about the process of creation. Basically, chert is a petrified limestone rock where the calcium carbonate is displaced with silicon dioxide. The limestone rocks found in the Ozarks formed in a shallow tropical sea much like we have in the Caribbean today. Most of the Ozarkian chert deposits are in Mississippian-age deposits, from about 325 to 360 million years ago. They are most often associated with what our state geologists call the Boone Formation.

Chert is a siliceous rock containing various amounts of silica dioxide and mineral contaminants that change the color from tan to gray to black. With all that silica, it shouldn’t be surprising that chert has some glass-like characteristics such as sharp edges. Flint is the name used when the hardest forms of chert were used to make arrowheads and sharp-edged tools. In the chert nodule shown here, fragments are hard and angular and make a wonderful coarse abrasive that has helped carve the Buffalo River valley. 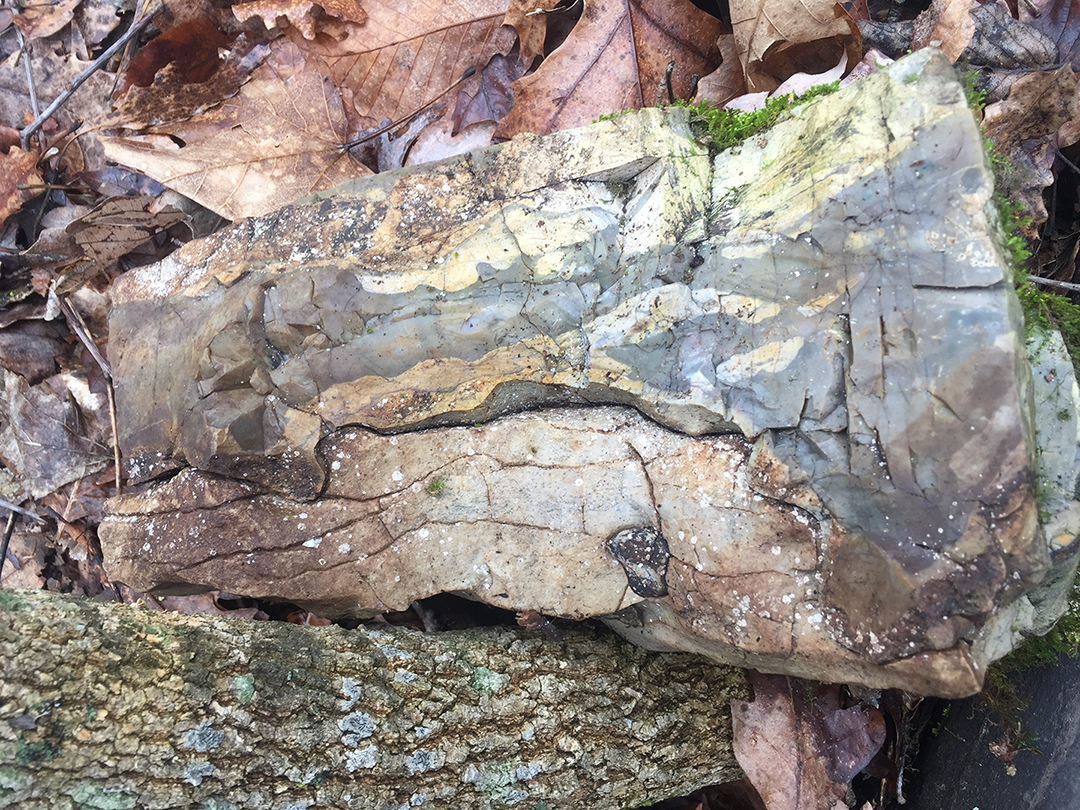 Chert nodule penecontemporaneous near Rogers, Arkansas:  This chert nodule shows the common color range for chert that is formed about the time the limestone rock is being deposited.

The nodule is bisected by fracture lines that will quickly break apart in the freeze/thaw cycle now that the rock has dislodged from the bluff, breaking into the common fist-sized pieces we usually see. The limestone from which this piece of chert formed was a thick calcium carbonate mud with tiny microfossils mixed in for good measure, so there are no visible fossils. The silica came from the bodies of diatoms and other silica-bodied creatures of those early primordial seas. In this type of chert, the displacement of carbonate by silica probably happened about the time the limestone rock was hardening. Using a word only geologists could love, it is called penecontemporaneous — at or near the same time — chert.

The Boone Formation, well exposed on the west side of Harrison along U.S. Highway 412, is somewhere around 300 feet thick, but not as a solid deposit. Because the sea level was rising and dropping more or less continually during the period the formation was being deposited, the Boone Formation is interrupted by large and small layers of silt, clay or sand which turned into mudstone, shale or sandstone, respectively. Sometimes these other deposits eroded away before the sea rose again and more limestone formed atop the original deposit. Every time there is a disruption in deposition, a bedding plain is formed in the rock layer. 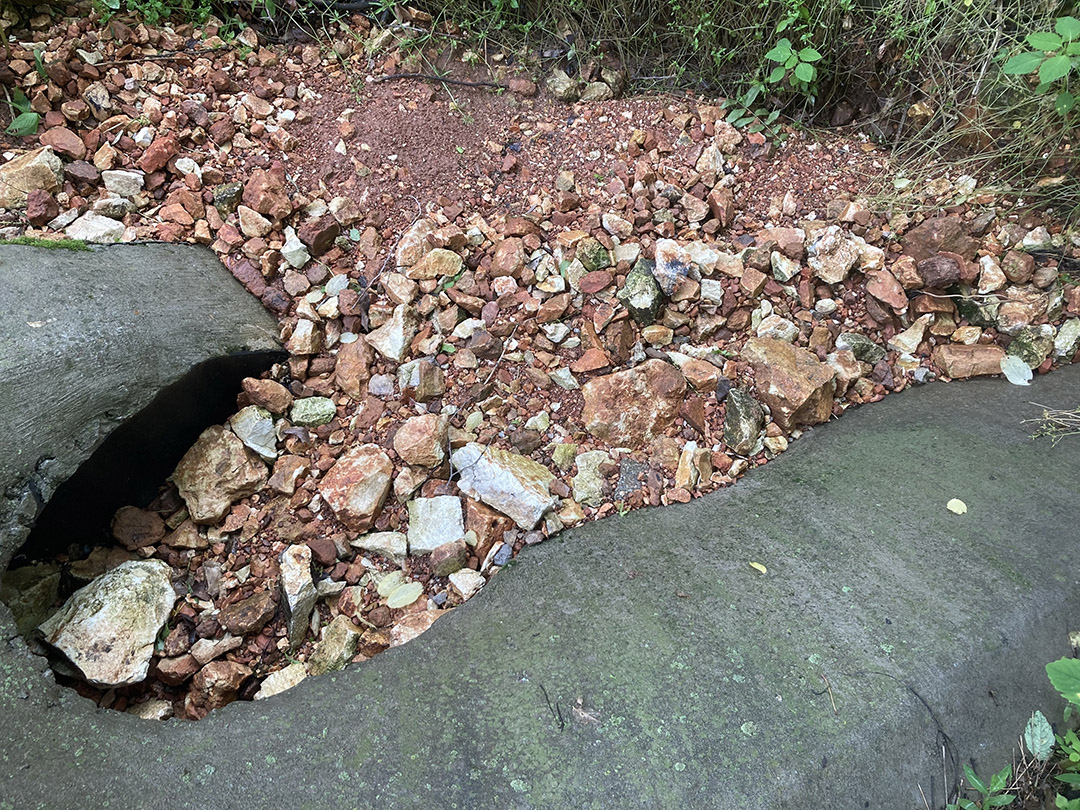 Chert tripolitic at the NWA mall:  The common chert found along most Ozarks streams is called tripolitic chert that formed sometime after the limestone beds were well established.

It is these bedding plains that give rise to our most common form of chert found in the Ozarks, the fossil-bearing beige chert we usually find along the banks of streams and rivers. The light-colored fossiliferous rock is called tripolitic chert and represents an event that occurred after the limestone deposits were in place. Tripolitic chert is lighter in weight and more porous than chert formed at about the same time the limestone rock is forming. In Tripolitic chert formation, it is believed hot water loaded with a high concentration of silicon leached into the cracks created by the bedding plains, removed the calcium carbonate, thus allowing micro crystals of quartz to form inside the matrix.

The silica needed to provide the mineral storehouse for all of that chert most likely came from a string of volcanoes that appeared in the ocean when the Ouachita Mountain building was occurring about 300 million years ago. It is believed that when the petrified limestone deposit was dewatered, it fractured into small pieces. Above ground, these charts tumble downstream and carve our valleys; below ground these fractured layers provide porosity to keep our wells supplied with water. In a kind of magic trick, we have younger chert deposits sitting in a bank of limestone that could be as much as 50 million years older.