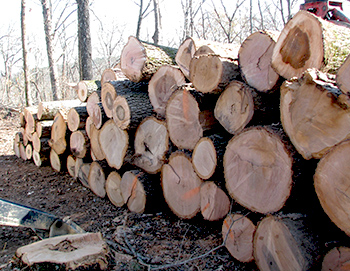 Bioenergy can be as simple as firewood or as complex as oils refined from wood waste and burned in diesel engines. Bioenergy touches our day-to-day lives in many ways that we don't even recognize.

Wood biomass is the most commonly found biomass. historically, humans utilized the heat produced from burning wood to keep themselves warm and to cook food. In addition, various power plants use wood and wood wastes to produce their own steam and electricity.

The most widely known use of agricultural biomass in Arkansas is the production of fuels from energy crops such soybeans. The recent increase in corn acreages may also contribute significantly to fuel production. Other biomass includes residues from agriculture and animal wastes as well as grasses.

Geothermal energy is energy obtained from the Earth's core. This can be seen in the form of volcano eruptions and geysers.

Geothermal power is cost effective, reliable and environmentally friendly however, it has been limited to certain areas. In recent years technological advances have allowed researchers to find ways to harness this energy and make it accessible in other parts of the world.

Hydropower is energy that resulted from moving water such as rivers and waterfalls. The force of the water as it moves downstream powers generators. Waterwheels are examples of early forms of hydropower.

Solar power can be classified as either active or passive. Active solar power comes from the use of man made tools such as solar panels (photovoltaics) to convert the sun's energy into a usable form.

Passive solar power techniques include designing a building for optimal sunlight coverage, orienting a space to circulate the air naturally or using building materials that help disperse light and heat.

Sunlight can be converted into usable electricity using photovoltaics (also known as Solar Panels). Solar photovoltaic systems can be found on buildings, automobiles, boats. As the price to manufacture decreases, the use of Photovoltaic cells will increase.

Home Heating - 5 Ways to Save