Blooming Bradford pear trees are a sure sign of early spring in Arkansas. While the blooms are lovely, the trees do not weather well over time and are considered invasive. 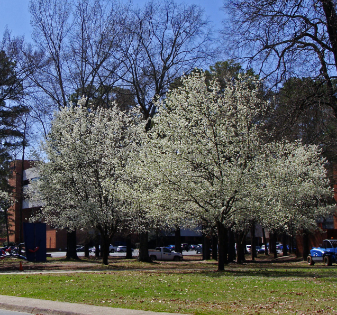 The same toughness that made Bradford pear trees such a good choice in heavily trafficked landscapes, also makes the pear an aggressive spreader. They also produce stiff thorns as long as 3 inches. These aggressive trees can quickly crowd out native species.

Bradford pears are poorly formed trees with many limbs originating from a central location. This characteristic creates a weak spot in the tree that makes Bradford pears susceptible to storm damage and greatly reduces the potential life span of the trees.

Major points in the case against Bradfords:

So what can you do about your Bradford pear trees?

What should I plant instead of Bradford pear trees?