Invasive species which prosper in a new environment typically are harmful to native species. The Northern Snakehead and Asian Carp are cause for concern in the Mississippi, White, and Arkansas Rivers.

What is the Northern Snakehead?

Northern snakehead fish are an invasive species that have established in several tributaries of the Mississippi, White, and Arkansas Rivers in Eastern Arkansas. Northern snakehead have long cylindrical bodies with a somewhat flattened head and sharp teeth inside the mouth. The body is usually dark tan-brown with darker blotches throughout.

How to identify northern snakehead

Habitat and diet of northern snakehead

Northern snakehead are a hearty species that can persist in many types of habitat but they appear to prefer shallow, stagnant waters with soft, muddy bottoms and aquatic vegetation. They are obligate air-breathers, meaning that they must regularly breathe atmospheric air to survive. Northern snakehead can survive up to four days completely out of the water. They are also known for moving short distances over land, though it is less common in larger adults than juveniles.

Northern snakehead are aggressive predators, likely matching the diet preferences of largemouth bass closely in most situations. The current and potential impact of northern snakehead on local fish communities is currently unknown.

While Asian carps include grass carp, agencies are usually referring to silver, bighead, and black carp when discussing invasive species in the U.S. Grass carp are frequently stocked in private, and sometimes public, waters as a cost-effective aquatic vegetation control tool, but they are almost always required to be functionally sterile triploids.

Silver and bighead carp have established throughout much of the Mississippi River drainage, including the White and Arkansas Rivers. Black carp have not spread as quickly, but they have been confirmed in the lower White and Mississippi Rivers. Silver carp are deep-bodied and laterally compressed with very small silvery scales. Their eyes are slightly downward facing. 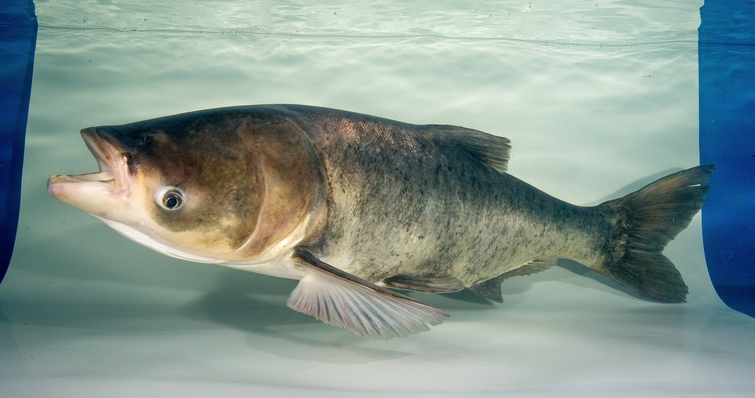 Bighead carp are very similar in size and shape to silver carp, but with slightly larger heads and dark blotches along their sides.
Image courtesy of the U.S. Fish and Wildlife Service.

How to identify Asian carp

Silver carp are deep-bodied and laterally compressed with small silvery scales. Their eyes are slightly downward facing. Silver carp are known to jump above the surface of the water when startled by the sound of boat engines. This behavior and their large size, commonly 40-60 pounds as adults, make them very dangerous for boaters.

Black carp are large molluscivorous river fish that have the ability to significantly reduce benthic invertebrate abundance in experimental ponds. This is a severe threat to public waters as most native snail and mussel species in North America are already threatened or endangered for one reason or another.

What if I find a Northern Snakehead or an Asian carp?

If you find a northern snakehead, silver, bighead or black carp, kill it immediately and report your encounter to the Arkansas Game and Fish Commission Aquatic Nuisance Species coordinator by email at reportans@agfc.ar.gov.

If you are unsure whether you found an Asian carp or Northern Snakehead, contact the Arkansas Game and Fish Commission for identification assistance (501-223-6300 or 800-354-4263).

Photographs and location details are very helpful in both situations. Reports from the public are critical to help track the spread of nuisance species.