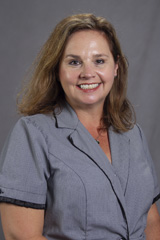 Tracy Courage is the director of communications for the Cooperative Extension Service.

Tracy grew up in rural West Tennessee, where she was active in 4-H for many years. She has a BA in English with a minor in International Studies from Rhodes College in Memphis and an MA in Mass Communication from the University of Arkansas at Little Rock.

She worked 15 years as a journalist for daily newspapers in Tennessee, Indiana, and Arkansas, including eight years at the Arkansas Democrat-Gazette as a higher education reporter and then as the newspaper’s night city editor.