About 30 years ago, gardeners who wanted a summer white-flowering tree/shrub would have planted a panicle hydrangea (Hydrangea paniculata). The advent of the white crapemyrtle may have killed the Southern panicle hydrangea market, but new cultivars might renew the plant’s popularity.

Originally from Japan, this plant with its impressive flowers has graced gardens worldwide for many years and is noted in a 1899 gardening book. On the species itself, (H. paniculata), stems are capped with a large, cone-shaped panicle consisting of mostly fertile flowers. During the mid-1800s, a cultivar with mostly sterile but more dramatic flowers was developed and named ‘Grandiflora.’ The Grandiflora, also known as the PeeGee, became a standard in the garden trade for over 100 years.

In Arkansas, flowers appear in late June and hit full stride by mid- to late July. By the middle of August, the white sepals begin to change to varying shades of pink. Eventually the large panicles turn a light brown. Many folks harvest the panicles at that stage for dried arrangements. Several noteworthy cultivars follow the same color sequence; however, they flower earlier or later than PeeGee. ‘Praecox’ typically flowers 3–4 weeks before PeeGee while ‘Tardiva’ flowers later, often into September.

All of the cultivars vary somewhat in the size of the panicle and composition of sterile flowers. Some cultivars boast panicles that are at least 15” in length! One of primary objections to PeeGee is that stems are not sturdy enough to hold the massive terminal panicles, resulting in a plant with a floppy habit in late summer. Many of the newer cultivars including ‘Ruby’ (Angel’s Blush®), ‘Unique’, and ‘Chantilly Lace’ have solved that problem. The large terminal panicles on these new selections are held more erect. While the cultivar ‘Pink Diamond’ gets lots of press, it may not be the best cultivar for the mid-South. It would appear that our intense summer heat does not let the rich pink sepal color develop fully.

Since flowers are born on new wood, you can be quite aggressive in pruning in the fall or spring and still have a nice flower display in the summer. Many gardeners train panicle hydrangea into a small tree by selecting one or two main stems at an early age.

In contrast to most other hydrangeas, panicle hydrangea performs well in full sun, provided it gets adequate water. It will certainly grow and flower in a partially shaded site making it fairly adaptable to sun exposure. Like many garden plants, it would prefer a good, loamy, moist soil, but even that is not an absolute.

The fact that panicle hydrangea does not have significant fruits or fall color does not diminish the value of this plant in landscapes since it flowers for such a long period of time. Because of its dramatic flair, it should be used either as a specimen tree/shrub or at the back of a mixed shrub border.

As odd as it may seem, this is one tough hydrangea for full sun. 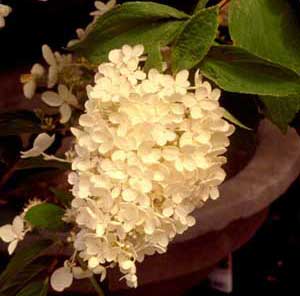 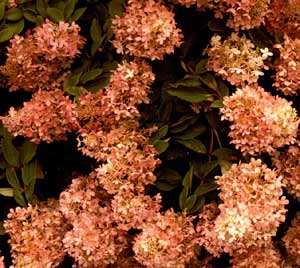 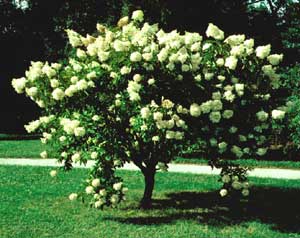 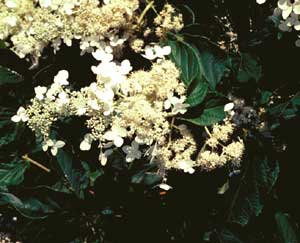