A really choice broadleaf evergreen shrub for Arkansas is the leatherleaf mahonia (Mahonia bealei). In late spring/early summer, when large clusters of electric blue “grapes” grace this plant, there is nothing more beautiful in the plant world.

Leatherleaf mahonia is almost a signature plant of the South. The broadleaf evergreen foliage is coarse and distinctive. The pinnately compound leaves are composed of nine to thirteen leaflets that are adorned with very sharp teeth at the margins. Individually, the leaflets look very much like a holly (Ilex) leaf. When the plant is grown in the shade the leaf color is a very dark, almost blue green. If you want, you could take advantage of these sharply serrated leaves and use this plant as a short hedge to stop people from trampling through certain parts of your yard. A small pint of blood could be donated if you are not careful when passing near this plant. Unlike its western cousin, Oregon grapeholly (Mahonia aquifolium), leatherleaf does not display a burgundy winter foliage color.

Soft, sulfur yellow flowers appear above the foliage in terminal racemes in mid-February to early March. While not overwhelming, the flowers benefit from being born above the dark foliage. Flowers are reported to be extremely fragrant.

Starting in late April and lasting through July, marvelous grape-like clusters of fruits adorn this plant. The oval-shaped blue-black berries are covered with a marvelous electric blue waxy bloom. While subtle, in many cases the fruit stalks may be a vivid red, which contrasts beautifully with the robin’s egg blue fruits. The amazing thing about these vivid fruits is that the clusters are often nestled in the evergreen foliage like a decorative table arrangement. Birds love the fruits, so they may be removed quickly after they ripen.

While leatherleaf mahonia can survive full sun, it is best planted in partial to full shade. In the South, this plant will look sickly yellow when grown in full sun. Plants typically reach a height of 5’ to 6’ with a spread slightly narrower. Because of the unique coarse texture, this plant is ideally suited for Oriental gardens. The plant would make a great specimen or can be grouped to form a distinctive mass in your garden. Placement does require some thought with this plant.

Leatherleaf mahonia has no serious disease or insect problems in Arkansas. Except for the sun exposure, this plant is fairly tough and adaptable. Pruning maintenance would be minimal with this garden shrub.

While cultivars of this species are not common, there are several other worthy species of mahonia that you might wish to pursue. Its western cousin, Mahonia aquifolium, is another fine broadleaf evergreen for most of Arkansas. Similar in many ways to leatherleaf, Oregon grapeholly tends to spread more and displays vivid wine purple winter foliage color. While the leaves are not quite as coarse, the flowers and fruits are almost identical. For southern Arkansas, you might want to try the Chinese mahonia (M. fortunei) or Mahonia gracilis. Creeping mahonia (M. repans) would be a cute plant for gardens in northern Arkansas. The plant is only 18” tall.

In older literature, Mahonia plants were lumped in with barberries (Berberis). The genus, Mahonia, is named in honor of Bernard McMahon, a patron of the botanical sciences. 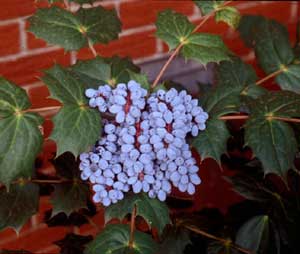 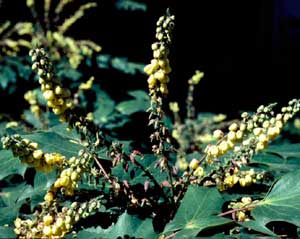 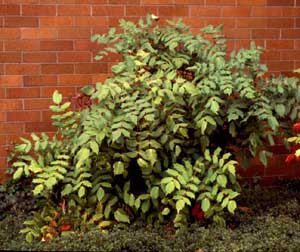