LITTLE ROCK — Despite a second consecutive year with more than 40 percent of the contiguous United States toiling under drought conditions, Arkansas soybean and cotton growers managed to tie or improve their lot in 2022. 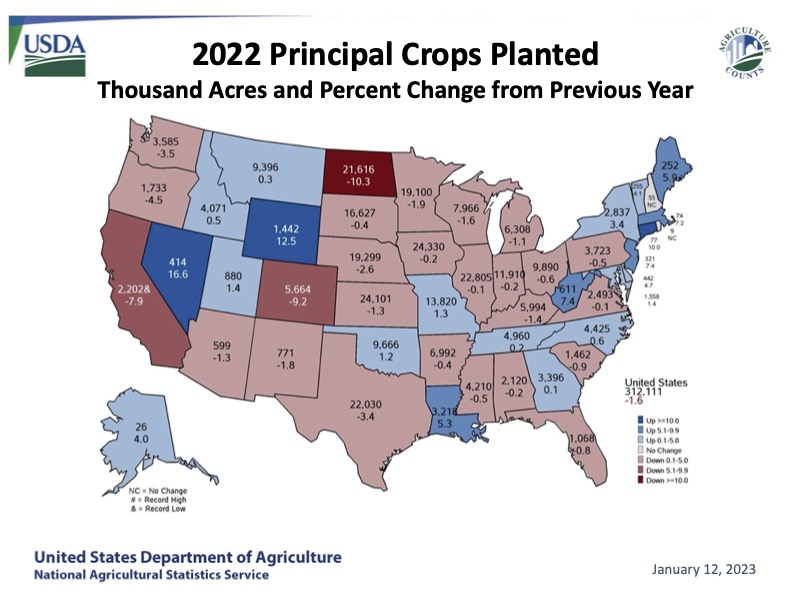 A HARD YEAR IN THE FIELD — According to the U.S. Department of Agriculture’s Crop Production 2022 Survey, published Jan. 12, U.S. growers planted about 312 million acres of crops, a 1.6 percent decrease from the previous season. They harvested approximately 286 million acres, a drop of 4.2 percent from 2021 year-end numbers. (Graphic courtesy USDA.)

Arkansas planted soybean acreage rose more than 4 percent in 2022, to nearly 3.2 million acres, with about 3.15 million of those acres being harvested. The state average yield remained the same year over year at 52 bushels per acre for an overall production increase of 7.8 million bushels in 2022. Nationally, soybean production fell from 4.47 billion bushels to 4.28 billion bushels.

Jeremy Ross, extension soybean agronomist for the University of Arkansas System Division of Agriculture, said the final numbers were a pleasant surprise after a challenging year.

“Our average yield was reduced by 1 bushel per acre from the earlier estimates,” Ross said. “I was expecting the state average yield to be reduced from the 53 bushels-per-acre fall estimate, but I thought it would be lower than 52. From conservations I had with many soybean growers, they all said their farm soybean averages were average at best.

“I was expecting yields to be much lower due to the drought and high temperatures we had during June and July. 2021 had a much better environment for high soybean yields than we saw in 2022. Looking at yields from other states, all surrounding states, other than Mississippi, had lower average soybean yields in 2022 than was reported 2021.”

Bill Robertson, extension cotton agronomist for the Division of Agriculture, said the state’s current five-year average for cotton yield is 1,188 pounds of lint per acre.

“Good cotton usually picks very good, especially when little rainfall occurs after boll opening,” Robertson said. “We saw few weather-related losses across most of the state, giving us the opportunity to get almost everything the plant produced in the module.

“Our yield-per-acre values were expected to be higher than estimated during the fall,” he said. “This is good news, especially in our current economic situation.”

Robertson said that the most challenging issue for many Arkansas growers in 2022 was the increased percentage of the state’s crop receiving discounts for high micronaire — an indication of cotton’s fiber fineness and maturity.

“The wonderful weather we had basically the whole month of September matured our top crop more so than we may have ever experienced in Arkansas,” he said. “Between the more mature bolls and delays in initiation of our harvest aid programs, some varieties were falling in the discount range for ‘high mic’ more than others.”

Arkansas winter wheat acres, planted in the fall of 2022, fell about 14 percent from the previous year to 190,000 acres. Average yield, harvested earlier in the year, fell from 58 bushels per acre in 2021 to 53 bushels in 2022. Jason Kelley, extension wheat and feed grains agronomist for the Division of Agriculture, said the crop was likely impacted by rainfall in April 2022.

“The decrease in acres was a little surprising given the dry fall that gave wheat farmers the opportunity to plant,” Kelley said, noting that wet weather often limits opportunities to plant wheat. High market prices would have also incentivized higher acreage, he said, although high fertilizer prices provided an economic disincentive.

Growers managed to harvest 695,000 of those acres, with a lower yield than the previous year, falling from 184 bushels per acre to 173 bushels.

The result was “not surprising, given the heat and dry weather that occurred during the critical pollination and grain fill times,” Kelley said. “Even with approximately 95 percent of our corn acres being irrigated, heat and lack of rain are still hard to overcome.”

Arkansas planted peanut acreage fell about 8 percent in 2022, from about 36,000 acres to about 33,000. This was the second straight year of declining acreage for the crop in Arkansas, which reached 39,000 planted acres in 2021.

As extension rice agronomist Jarrod Hardke put it, the 2023 rice-growing season was “erratic and difficult.” A wet spring — the fourth or fifth in a row for many of the state’s growers — followed by a hot, dry summer challenged growers on several fronts, from irrigation to nutrient inputs.

Arkansas’ planted rice acreage fell by more than 9 percent in 2022 to about 1.1 million acres. Harvested acres fell as well, from nearly 1.2 million acres to about 1.08 million. Average yield across all rice varieties fell as well in Arkansas, from about 7,630 pounds per acre to about 7,410 pounds, a decrease of about 3 percent.

“The acreage decrease was expected given the major increase in input costs, particularly fertilizer and fuel,” Hardke said. “However, it is the first time Arkansas has had two consecutive years of rice acreage decline since 2006-2007. It is also the first time the state has had two years with harvested acreage below 1.2 million acres since 1988-1989.

“The drought and summer heat made every task more difficult during the season, which can have an impact on yields while the heat itself can do damage,” he said. “A significant drop in yield from last season’s record was again anticipated, but in a stroke of luck, most of the rice missed the worst heat at what could have been the worst timing. That is to say, it wasn’t great — but it could’ve been worse.”